WATCH: Why the Liberal Establishment is Afraid of Free-Thinking Black Americans

Liberals just can’t handle dissent. They want to stifle it, suppress it, punish it.

The plantation supervisors are out in full force.
They want their slaves back. https://t.co/8KbMBJRt3e

West tweeted support for Candace Owens, who stood up to “Black Lives Matter” protesters when they tried to silence her. The Conservative Review’s Deneen Borelli included a must-watch clip of Owens at an event.

Borelli said the left-wing mob has tried to silence her, too, through intimidation. Borelli, the author of Blacklash: How Obama and the Left Are Driving Americans to the Government Plantation, said liberals don’t want black Americans to think for themselves. That’s dangerous. Big government policies have failed them and the rest of the country. Bad things will happen for liberals if too many black voters express their anger.

What else is the liberal establishment afraid of? Listen to Borelli.

Previous Joe Biden, Dems and the Race Card: They Don’t Leave Home Without It
Next Doing This Might Save the Can’t-Do Republicans — And They’d Better Do it FAST 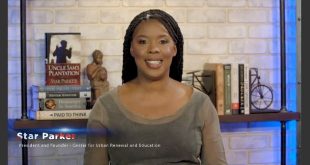 What is a Conservative? — How These College Students Answered the Question.

PragerU asked students at the University of Texas at Austin what is a conservative, and …