Jason Riley: A Reality Check on ‘Racism’ and Urban Decay

The news media has spent the past week trying to rehabilitate the reputations of Baltimore and Al Sharpton, which is more evidence that they’ll try just about anything to advance the Democratic Party’s Trump-is-a-racist storyline.

Alas, we could be having a much more productive debate about why black-run cities like Baltimore haven’t produced more black economic advancement. Or why black politicians like Maryland Rep. Elijah Cummings, who was re-elected to a 13th term with more than 76% of the vote in 2018, so routinely skirt responsibility for the living conditions in their districts. Or whether there is any significant connection between black political power and black prosperity.

Mr. Trump’s Twitter spasms may eventually turn off enough white suburban moms to cost him re-election, but caution isn’t part of his repertoire. And when dealing with political opponents who are obsessed with racism, real or imagined, indifference to whether you are labeled a racist might even be an asset. The reality is that much of the racism that the left complains about these days has proved under scrutiny to be imaginary, which is good news for the country but bad news for politicians and activists who thrive on racial division.

The last time most of us thought about Baltimore was probably 2015, when residents rioted after a black suspect died in police custody. A year earlier, riots had erupted in Ferguson, Mo., after another black suspect was shot dead while assaulting a police officer. Much was made of the fact that Ferguson’s city leaders and police department were mostly white. A U.S. Justice Department review of the incident said that it was “critically important for law enforcement agencies, and the Ferguson Police Department in particular, to strive for broad diversity among officers and civilian staff.”

But if racial and ethnic diversity were so essential to preventing police shootings and subsequent race riots, what explained the unrest the following year in Baltimore, which had a black mayor, a black City Council majority, a black police chief and a majority-minority police force? Is it possible that biased law enforcement isn’t the problem?

In 2016 Harvard economist Roland Fryer published an empirical study that examined more than 1,000 police shootings in 10 major departments nationwide. He concluded that there was no evidence of racial bias in police shootings and that blacks are about 24% less likely “to be shot at by police relative to whites.” So far, such research has failed to persuade Colin Kaepernick, Black Lives Matter activists and Democratic presidential candidates. And the political press prioritizes anecdotal evidence and viral videos on social media, not hard data. Still, it’s worth noting that a new academic study published last week is broader in scope than Mr. Fryer’s and backs his findings.

Writing in the journal Proceedings of the National Academy of Sciences, researchers from the University of Maryland and Michigan State University concluded that racial disparities in police shootings stem from racial disparities in criminal behavior and not from police bias. “We did not find evidence for anti-Black or anti-Hispanic disparity in the police use of force across all shootings, and, if anything, found anti-White disparities when controlling for race-specific crime.”

Many on the political left and in the media are loath to discuss how large black-white differences in violent crime rates result in racially disparate encounters with police. But why should anyone be surprised that young black men are far more likely than their white peers to be shot by police when young black men commit homicides at nearly 10 times the rate of white and Hispanic young men combined? “One of our clearest results is that violent crime rates strongly predict the race of the person fatally shot,” write the authors. Moreover, “reducing race-specific violent crime should be an effective way to reduce fatal shootings of Black and Hispanic adults.” More minority cops might help law enforcement build trust in certain communities, but the “data suggest that increasing racial diversity would not meaningfully reduce racial disparity in fatal shootings.” Minority officers are no less likely to draw their weapons on minority suspects.

When liberals decide to grapple with these realities, we’ll know they are serious about addressing racial disparities, never mind fixing the nation’s Baltimores. But don’t hold your breath. Mr. Sharpton was a frequent visitor to the Obama White House, and given the way the people on stage Tuesday and Wednesday night have lined up to kiss his ring, chances are that the reverend will be monetizing racial strife for years to come. We may be in a racial holding pattern until the 2020 election. Mr. Trump won’t back down, and his opponents, if they’re being honest with themselves, don’t really want him to.

Previous Star Parker: Ownership, Not Government Spending, Will Shrink Wealth Gap
Next This Conservative Asks Baltimore Leaders: What Happened to the Money? 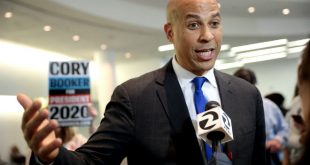 In March 2020, the Supreme Court will rule on the constitutionality of Louisiana’s new abortion …