The U.S. Supreme Court Affirmed That Trump Has the Authority to Protect America From Its Enemies 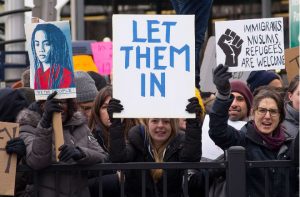 The President of the United States has the power to suspend or restrict immigration of any aliens or class of aliens in the interests of the country.

Just as former president Barack Obama and others before him restricted immigration, so has President Donald Trump.

Chief Justice John Roberts, who authored the conservative majority opinion, wrote that the order was “squarely within the scope of presidential authority” under federal law.

“The sole prerequisite set forth in [federal law] is that the president find that the entry of the covered aliens would be detrimental to the interests of the United States. The president has undoubtedly fulfilled that requirement here,” he wrote.
…
While the policy was upheld, the case was sent back to the lower courts, which were told to rely on the Supreme Court’s interpretation of executive authority.

Some Americans believe the ban should include more Muslim countries.

Previous Is There a Downturn in the Market?
Next The Supreme Court Just Ruled That Government Employees Don’t Have to Pay Dues to Leftist Unions