BCN Senior Editor July 19, 2017 Commentary Comments Off on Abortion Advocates Won’t Like What This Judge Said About California’s Pro-Abortion Law 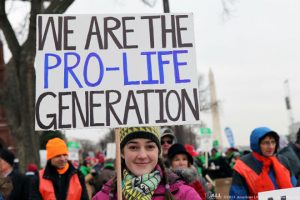 The U.S. Court of Appeals for the Ninth Circuit ruled last year that California’s so-called Reproductive FACT Act doesn’t violate the First Amendment rights of pro-life pregnancy centers by requiring them to post this notice:

California has public programs that provide immediate free or low-cost access to comprehensive family planning services (including all FDA-approved methods of contraception), prenatal care and abortion for eligible women. To determine whether you qualify, contact the county social services office at [insert the telephone number].

For a pregnancy center with a mission to save unborn lives, this is promoting a procedure to end those lives.

But there might be hope for these pregnancy centers. The American Center for Law and Justice reported that a pro-life pregnancy center in a different case just received a favorable ruling from a lower California court.

“This speech is not merely the transmittal of neutral information, such as the calorie count of a Big Mac, or that smoking tobacco or drinking alcohol can be hazardous to health. It is not as benign as compelling a plum producer to contribute to a marketing campaign touting the benefits of plums. The State commands the clinics to post specific directions for whom to contact to obtain an abortion. It forces the clinic to point the way to the abortion clinic and can leave patients with the belief they were referred to an abortion provider by that clinic.” (emphasis added)

The judge also stated that the government has “numerous alternative methods of publishing its message. This statute places too heavy a burden upon the liberty of free thought. The State can deliver its message without infringing upon anyone’s liberty. It may purchase television advertisements as it does to encourage Californians to sign up for Covered California or to conserve water. It may purchase billboard space and post its message directly in front of Scharpen Foundation’s clinic . . . . It can do everything but compel a free citizen to deliver that message.”

No matter how much abortion advocates claim otherwise, the killing of unborn babies — despite its legal status — is morally repugnant and not remotely a health care issue. It is an expedient and heinous end to an inconvenient pregnancy. No government should compel support or suppress disagreement or force pro-life pregnancy centers, licensed or not, to promote the death of unborn babies.

The court hasn’t heard the case yet, but the judge’s ruling rejecting the state’s request for dismissal brings hope.

Previous WATCH: Herman Cain’s Warning to the GOP on Obamacare Repeal
Next Ken Blackwell: Every Vote Must Count