Atheists Won’t Like What This Federal Agency Just Decided 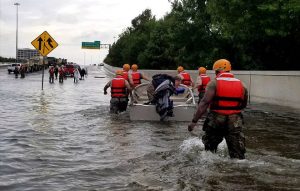 Although FEMA has helped religiously affiliated organizations, it didn’t reimburse churches for damage to the structures themselves.

FEMA changed the rules earlier this week and will allow churches and other houses of worship damaged by a natural disaster to apply for reimbursement for assisting victims.

After helping so many Texans in need after #Harvey, churches can now receive federal assistance from @fema like other nonprofits involved in the relief efforts. https://t.co/pruE7Pu1K4

In a complaint filed in federal court in Houston, the churches said they would like to apply for aid but it would be “futile” because FEMA’s public assistance program “categorically” excluded their claims, violating their constitutional right to freely exercise their religion.

They said FEMA’s ban on providing relief where at least half a building’s space is used for religious purposes, a policy also enforced after Hurricane Katrina in 2005 and Hurricane Sandy in 2012, contradicted a recent U.S. Supreme Court decision making it easier for religious groups to get public aid.

Some naysayers object to church reimbursement because churches have tax-exempt status. Others object because of so-called  separation between church and state, which isn’t stated or even implied in the U.S. Constitution.

Churches were among the first to provide aid to areas hit by hurricanes, and they continue to help recover & rebuild. Its time they receive the equal treatment from our govt when it comes to disaster relief. I applaud @fema‘s new rule. https://t.co/8BJQq3kGDS

Previous Why Blacks Should Fight for Traditional Marriage
Next BOOM! Deneen Borelli Calls Out Former Obama Administration On Its Failed Iranian Policy

The Center for Urban Renewal and Education’s (CURE) mission is to educate, empower, and equip …