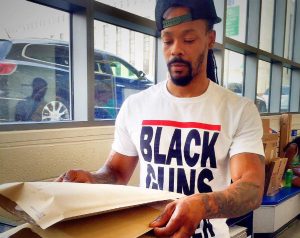 If more black Americans spoke out in support of the right to keep and bear arms, perhaps liberals would stop pushing gun control every chance they get.

Self-defense is a natural right, and the founders saw fit to codify this right in the U.S. Constitution. But President Barack Obama, guarded by men with guns, never misses an opportunity to advocate infringing on this right after shootings — during Islamic terrorists attacks, for example.

The Black Guns Matter group said it wants to help blacks understand the importance of the Second Amendment and using guns safely. They recently held a town hall meeting in Philadelphia to talk about these and other issues.

“We’re informing people because there seems to be a push to keep people, especially in certain demographics, unaware and ignorant about their rights,” Toure said. “It’s not something they should have to fight for, it’s something that they’re born with. We’re just an educational resource for anybody who wants to learn.”

In the tense “Black Lives Matter” atmosphere, advising blacks on how to avoid violent consequences during police encounters is important for the safety of all involved.

A number of attendees complained that police treated them differently than white suburban gun owners. Toure agreed, but said he still encourages black citizens to arm themselves so they can defend themselves from crime. He added that if more people in the African-American community were legally armed it might change the perception among police and improve their relations with the community.

Toure said one perception in black communities is that if a person has a gun, he’s either a criminal or a cop.

“So we’re here to break that stereotype by showing people that to have a firearm, no different than the Founding Fathers said hundreds of years before me, that’s part of being a good citizen,” Toure said. “Not leaning on the police for everything. They have more things on their plate than they need to. Our own personal safety is up to us as citizens.”

Sheriff David Clarke would echo that sentiment. He said this at the NRA’s recent leadership forum: “Folks, my ancestors fought hard and shed blood for the right keep and bear arms for self-defense, and I am not going to cede that right back to the federal government or any level of government, for that matter. And neither should you.”

Watch this brief interview of Nicholas Johnson, author of Negroes and the Gun: The Black Tradition of Arms.

Previous This Is What a Pro-Life Black Pastor Said About the NAACP and Planned Parenthood
Next Philadelphia Vs. Cleveland: Divided We Stand