Clinton and Obama, First Heal Yourselves on Race

David Limbaugh September 23, 2016 Commentary Comments Off on Clinton and Obama, First Heal Yourselves on Race 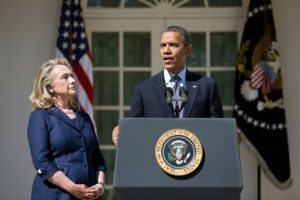 Hillary Clinton is the worst kind of political animal, one who will exploit anything for political gain, distort facts and shift her positions at will for votes, significantly more than your garden-variety pandering politician.

Remember when Clinton was for the Iraq War and then later savaged anyone who believed as she had as if they were reprobates? Remember when she opined that marriage is between a man and a woman? Remember her claim that she left the White House “not only dead broke but in debt”? Her pathetically laughable yarn that she came under sniper fire in Bosnia in the ’90s? That all her grandparents were immigrants? That she was named after Sir Edmund Hillary, who didn’t gain fame for climbing Mount Everest until Clinton was 5 years old? That she applied for the Marines in 1975? Yeah, that’s believable. LOL. Oh, and I promise I won’t rehash her email and Benghazi lies here.

She told MSNBC’s Chris Matthews in 2002 that she wouldn’t apologize for her vote to invade Iraq — emphasizing Saddam Hussein’s “megalomania.” She also defended her position in 2008 against then-candidate Barack Obama’s attacks, only much later changing her position.On same-sex marriage, she wasn’t remotely ambivalent. She went out of her way to clarify her position in 2000, saying, “I think a marriage is as a marriage has always been, between a man and a woman.” In the 2008 presidential campaign, she reiterated her opposition to same-sex marriage. Both PolitiFact and Snopes.com affirm that she didn’t fully flip on the same-sex marriage issue until March 2013, when she openly embraced “marriage equality.”

Movingly — for the easily deceived, anyway — she changed her “H” logo to be rainbow-colored (it’s all about solidarity, you know) and tweeted, “Every loving couple & family deserves to be recognized & treated equally under the law across our nation. #LoveMustWin #LoveCantWait.” She forgot to add “except for those Christian bigots,” but I digress. Clinton is utterly hostage to her political ambitions.

I recall (a term that is alien to Clinton) when people running for chief executive officer of the United States and those already serving as such appreciated the president’s duty to execute the laws and the importance of promoting law and order.

But President Barack Obama has repeatedly undermined law enforcement in this country and has inflamed racial tension, especially between the minority community and police — though he occasionally pays lip service to opposing violence. If he opposes the looting and violence in Charlotte, he has taken his time saying it, as any such announcement, to be effective, should be immediate and heartfelt.

What has got to end? Of course unjustified shootings must end, and unjustified police shootings of innocent civilians, when they occur, even more so. But Clinton has brazenly rushed to judgment on both shootings, while investigations are proceeding and evidence is being gathered.

No halfway decent person would attempt to defend unjustified police shootings. But what about legally justified shootings? Do they have to end, too, Mrs. Clinton? Are you saying that cops are never justified in shooting? Do you have even the slightest pangs of conscience for pouring gas on these issues?

Clinton can’t possibly believe what her tweet recklessly implies. But she is obviously less concerned about being levelheaded and fair than with pandering to drive minority voter turnout, which she’ll desperately need if this race continues to tighten.

Such rhetoric is igniting a powder keg, and it’s harming minorities, not helping them. Also disproportionately harming minorities are Obama’s dramatically increased government dependency programs, which have had a devastating impact on the nuclear family, on the economy overall and on jobs.

How can we be surprised that there is widespread discontentment in America, especially in minority communities, when liberal policies are destroying their standard of living and that sense of “hope” that Obama glibly promised?

One of the cruelest lies is that leftist solutions lead to greater prosperity and income equality — that Democratic and liberal policies benefit the black community and that conservatives are indifferent.

No, these policies continue to trap minorities in woefully inferior inner-city schools and torpedo their upward economic mobility. Obama has had his way for eight years, and the plight of minorities is painfully worse. Clinton would give us more of the same, not because it will help but because it’s her ticket to power.

I long for the day when a majority of Americans and a substantial percentage of minorities finally decide that liberals will no longer get a pass from minorities because of their allegedly good intentions when decades of abominable results scream otherwise.

Previous United Nations, Spare Us the Refugee Sanctimony
Next WATCH: Alveda King Calls for Spiritual Leaders in Charlotte to Do This