Ken Blackwell September 14, 2017 Commentary Comments Off on Enforcement of This Agreement Will Be a Key Test of ‘America First’ Policy 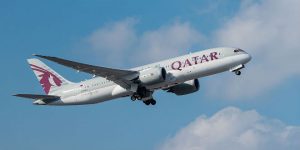 When it comes to our trade agreements with foreign nations, President Trump has pledged to prioritize defending American workers and standing up to countries that seek to take advantage of them. In just the last few weeks, the Administration has kick-started the renegotiation of the North American Free Trade Agreement and launched an investigation of Chinese trade practices. Conservatives should be grateful that we finally have an administration that is putting “America First” and standing up to fight for American workers and businesses.

Both of these countries’ governments are breaching their agreements with the U.S. by providing their state-owned airlines – Emirates Airline, Etihad Airways and Qatar Airways – with over $50 billion in subsidies. By propping up their airlines with an unprecedented amount of money, the UAE and Qatar are enabling these carriers to be immune to standard market forces and pursue expansion strategies that U.S. airlines are simply unable to compete with.

One of these market-distorting practices is called “capacity dumping,” in which the Gulf carriers operate more routes and flights to the U.S. than for which there is passenger demand. The flood of excess capacity drives yields into the ground and makes the routes uneconomic for American airlines, which can’t rely on the U.S. Treasury to reimburse their losses. Since U.S. airlines are subject to the fluctuations of the free market and cannot fly money-losing routes the same way the subsidy-backed Gulf carriers can, they are forced to compete on an uneven playing field – putting the jobs of the 1.2 million American workers who rely on a strong domestic aviation industry at risk.

Despite ongoing reports of massive financial losses, the three Gulf airlines continue their aggressive push towards international dominance. It should be stunning that three airlines, servicing a combined domestic population of just 11 million have more wide-body aircraft on order than the U.S. and Chinese industries combined. Despite a saturated market, the three Gulf carriers continue to dump capacity with new planes, their losses appearing only on paper thanks to their access to lucrative government subsidies.

History has shown what this could lead to. Just a few decades ago, the U.S. steel industry was on the verge of collapse. “Steel dumping” was rampant as foreign countries both directly and indirectly subsidized their domestic steel industries, “dumping” the excess on to the U.S. market, which artificially depressed prices and closed down mills. In order to preserve this important industry, the Reagan administration accepted Voluntary Restraint Agreements from steel-exporting countries. These countries voluntarily agreed to limit the amount of steel they exported to the United States and the United States responded by terminating trade cases against their exports. We cannot be a nation that allows foreign governments to prop up and operate their state-owned enterprises in ways that violate international agreements and intentionally distort markets, harming U.S. companies and costing American jobs. We must enforce existing agreements to ensure U.S. businesses have a fair and equal opportunity to compete. This means putting a stop to market-distorting subsidies.

Ken Blackwell was a Domestic Policy Advisor to the Trump Presidential Transition Team.

Previous WATCH: This is What Liberals Used to Say About Illegal Aliens
Next The Leftists Who Cried White Supremacy