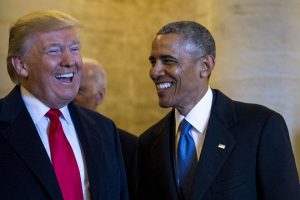 After disappearing from the spotlight for well over a year, former President Obama resurfaced at the University of Illinois on Friday just in time to take credit for the booming economy we’ve seen under President Trump. This comes just two months before the 2018 midterm elections. Trump has systematically dismantled Obama’s legacy via deregulation, tax cuts and by eliminating the individual mandate in Obamacare, so it’s understandable why Obama is desperate for accolades.

Obama spoke before a receptive audience Friday where he claimed that his administration reversed 40 years of bad economic trends during his eight years in office. He stated, “When you hear about how great the economy is doing right now, let’s just remember when this recovery started.” Unfortunately for the former president and thanks to facts, we do know when the recovery began – and it happened despite him, not because of him.

I guess in some part Obama does deserve credit for Trump’s economy. The moment he left office things got better.

Previous The Trump Administration Might Rescind Obama’s ‘Guidelines’ to Schools to Stop Suspending So Many Black Students
Next Nike Pays Kaepernick to Push Peddle False, Harmful Narrative of Police Brutality