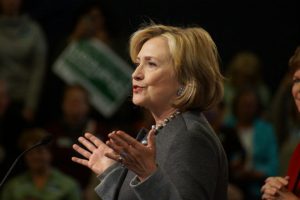 The fascinating thing about Hillary Clinton’s lie that “African-Americans” are disproportionately killed by police is that she continues peddling it after the murders of three law enforcement officers in Baton Rouge, which followed the ambush killings of five officers in Dallas. In both cases, the murderers were black men apparently convinced that the cops were out to get black people and who, therefore, sought to exact revenge.

President Barack Obama, too, talks about the “disparity” that blacks, compared to whites, are more likely to be killed by the police. That Obama — in lecturing about this so-called disparity — gets away with ignoring the disproportionate rate at which blacks, especially young blacks, commit violent crime is truly astonishing.

Should blacks, at 13 percent of the population, comprise 13 percent of doctors, 13 percent of lawyers and 13 percent of NBA players? If not, does this mean there is a “disparity” that we must address as a society? According to economist John Lott, teenage black males, compared to teen white males, are nine times more likely to commit murder — and the murder victim is almost always another young black man. What about that disparity, Mr. President?

It’s also interesting to watch the reaction of those who believe Clinton and defend her position, even when they are confronted with the facts. Talk about — pardon the pun — shooting the messenger. When I told someone that, according to The Washington Post, of the 965 blacks killed by cops last year, less than 4 percent involved a white cop and unarmed black man, he sniffed, “Why should a cop kill anyone who is unarmed?” Well, take the case for Michael Brown, arguably the white police-black suspect encounter that launched the Black Lives Matter movement and its mantra, “Hands Up, Don’t Shoot.” Eyewitness testimony and physical evidence show that Brown charged the police officer and attempted to get the cop’s gun. Unarmed does not mean non-threatening.

As Heather Mac Donald of the Manhattan Institute writes in The Wall Street Journal, “According to the Bureau of Justice Statistics, blacks were charged with 62 percent of all robberies, 57 percent of murders and 45 percent of assaults in the 75 largest U.S. counties in 2009, though they made up roughly 15 percent of the population there.”

This leads us to but one conclusion: Obama and Clinton are flat-out lying. The goal is obvious — to retain that monolithic black vote, without which Democrats cannot win at the presidential level.

Obama cannot brag about — and Clinton cannot run on — his economic record for blacks. Under his watch, black poverty is up. Net worth is down. The “wealth gap” between blacks and whites is at a 25-year high. And as to the employment of black men, their “labor force participation rate” (the percentage of those 20 years of age and over who are either working or looking for work) hit its lowest rate in December 2013 — well into Obama’s second term and his economic “recovery.” That low was the worst since 1972, when the Bureau of Labor Statistics began keeping such records. And since December 2010, black men’s employment rate every single month to date has seen lower numbers than any month under all other presidents dating back to 1972.

So, what to do? Change the subject, of course. Make the election about “social justice.” Prattle on about what Clinton calls the “school-to-prison pipeline.” Never mind that this drive to induce paranoia among blacks has real-world consequences. As mentioned, already it has helped inspire murderers to kill officers in Dallas and Baton Rouge. But it also causes police officers to be less proactive, fearing that they, too, will be accused of unfairly “profiling” blacks. Cops pull back. This police passivity means crime increases, the victims of which are disproportionately black, the very people Ms. Clinton claims to care so deeply about.

Lies get votes. But they also get people killed.

Previous Is America Ready for a Disruptive President?
Next Just Who Is the ‘Establishment?’