In Neil Gorsuch, Trump Kept His Promise to the American People

Ken Blackwell April 10, 2018 Commentary Comments Off on In Neil Gorsuch, Trump Kept His Promise to the American People 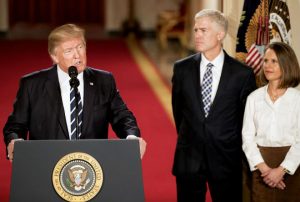 On April 10, Justice Neil Gorsuch will celebrate his first anniversary on the United States Supreme Court. President Donald Trump and his supporters should celebrate as well, because in Gorsuch, Trump kept one of his core campaign promises to the American people.

During his campaign, Trump promised that if elected, he would appoint Supreme Court justices like the late Justice Antonin Scalia: judges who respect the Constitution and interpret it based on how it was originally understood rather than his own personal policy preferences. Trump then took the unprecedented step of releasing a list of judges from which he would select his nominee. This move allowed voters to see and decide for themselves what they thought of his possible selections.

The list helped Trump win the election: an exit poll found that for one in five voters, a president’s appointments to the Supreme Court was “the most important factor” in their decision—and these voters went for Trump over Hillary Clinton, 57 to 40 percent. Voters knew that if Hillary won the election, she would select liberal justices who would legislate from the bench, who would interpret the Constitution based on what they wished it said, not what it actually says. In fact, during the campaign Clinton boasted that she had “a bunch of litmus tests” for her nominees, meaning she expected them not to be impartial and approach each case on its merits, but to vote certain ways to achieve her preferred policy ends.

In sharp contrast, Trump offered a list that was carefully crafted to include only thoughtful, principled jurists with a record of interpreting the Constitution with both originalism and textualism. In doing so, he gave Americans a voice in the determining the direction of the Supreme Court.

Just days after taking office, Trump followed through on his campaign promise and nominated Gorsuch to the nation’s highest court. Most Democrats desperately tried to block his confirmation despite his obvious qualifications, but they failed, and Gorsuch was confirmed by a 54-45 vote. He was sworn in on April 10, 2017.

Gorsuch’s track record from his first year on the bench shows Trump—and the American people—chose well. Since his confirmation, Gorsuch has consistently argued in defense of Americans’ constitutional rights. In oral arguments for NIFLA v. Becerra argument, Gorsuch raised objections to California’s law compelling pro-life pregnancy centers to advertise where their clientele can obtain a free or low-cost abortion, arguing the law could “compel” speech from a private speaker. He voiced similar concerns during oral arguments for Masterpiece Cakeshop, Ltd. v. Colorado Civil Rights Commission, the case in which a state agency fined a baker for declining to express a statement that conflicted with his religious beliefs.

The newest justice has also defended property rights as defined by the text of the Constitution. In oral arguments in Oil States Energy Services v. Greene’s Energy Group—a case concerning the ability of the Patent Trial and Appeal Board (PTAB) at the Patent and Trade Office to nullify patents—Gorsuch noted that strong patents to protect private property “is not a new idea,” but something with strong roots in American law and protected by the Fifth Amendment.

Justice Gorsuch has said that the duty of a judge “is to say what the law is, not what it should be.” That is the hallmark of a fair and independent judge—precisely the sort Trump promised voters. I offer my congratulations to Justice Gorsuch on a great first year, and my thanks to President Trump for keeping his promise.

Previous These Students Will Walk Out to Protest Killing Babies, Not a Constitutional Right
Next Forget the Trade Wars — Trump Should Focus on This Crisis Instead