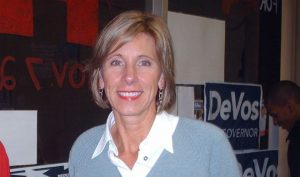 Q. What have you learned from the gauntlet you had to run to get here?

A. Not knowing exactly what to expect coming into it, I don’t have anything to compare it to, however, it seemed pretty difficult and pretty unnecessary, but I just kept putting one foot in front of the other and continue to do the things I thought were important to make the case to confirm me. I met with every member of the Health Committee. We reached out to all the members. None of the Democrats agreed to meet until after the holidays, or explicitly agreed not to, so that made it very compressed and it also gave them the opportunity to say, ‘Well, we haven’t met with her.’

Q. I haven’t seen protests like this over a cabinet nominee, even your entry into a school they tried to block.

A. I don’t think most of those are spontaneous, genuine protests. I think they’re all being sponsored and very carefully planned. We’ve seen enough written that they want to make my life a living hell. They also don’t know what stock I come from. I will not be deterred from my mission of helping kids in this country.

Q. Have you considered some political theater of your own, like bringing poor and minority kids trapped in failed public schools to Washington so Congress can tell them why they have to stay in failing schools while their kids attend private schools?

A. We had an example of that in Florida where over 10,000 parents and students marched in Tallahassee against that lawsuit that the teachers union had filed, which of course has been dismissed, thankfully (it was a lawsuit trying to block a school voucher program). I think that is an idea worthy of consideration.

Cal Thomas is one of the most popular syndicated columnists in the country, appearing in hundreds of newspapers. He also writes the Common Ground column (with his liberal Democrat friend Bob Beckel) and regularly appears on Fox News. He began his career in radio, TV, and print at the age of sixteen. 2014 marks the thirtieth anniversary of his syndicated column.