Fight for Schools is a group of concerned parents calling for the Loudoun County School Board chair and three members to resign. The group said it gained enough signatures on a petition last week to oust them.

Juli Briskman, a member of the Loudoun County Board of Supervisors, last week called members of the group “alt-right” on her personal Twitter account.

“TY @loudoun4all for a factual & thorough debunking of the alt-right FFS petitions. If they want to fight for schools they should support teacher pay increases, more mental health resources and ending the school to prison pipeline.”

Black and Jewish parents took issue with the name-calling.

“I think it’s absurd,” Joe Mobley told Fox News. Mobley, a father of four, is black. “It’s an ad-hominem” and used to distract from parents’ concerns about what’s taught in the classroom. “Obviously, as a Black dude it’s weird to be called a White nationalist.”

Elicia Brand, who is Jewish, said she was offended. 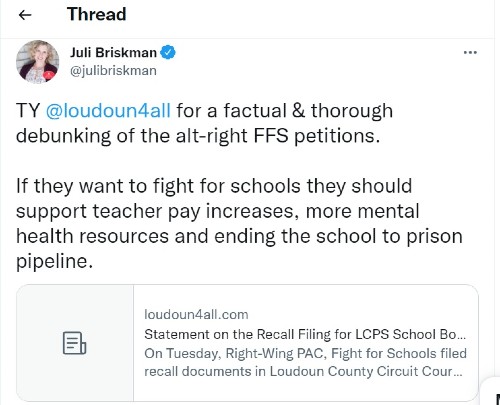 Loudoun County Public Schools has been under fire. Parents have been outspoken at school board meetings over the district exposing children to “critical race theory” and “transgenderism.” Parents also are concerned about mask mandates. A father accused the district of covering up his daughter’s rape. He said a boy wearing a skirt raped her in the girls’ bathroom. The father was arrested during a school board meeting.

Previous These Teachers Asked a Court to Block Enforcement of Loudoun County Schools’ ‘Transgender’ Policy — UPDATED
Next Pat Buchanan: Are Democrats Looking to the Lifeboats?

The State of Black America — The Past, Present, and Future