Put the Wall in the Platform

Phyllis Schlafly June 8, 2016 Commentary Comments Off on Put the Wall in the Platform 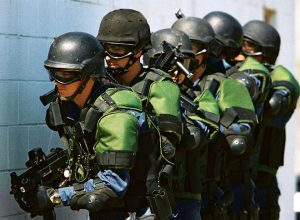 The promise to build a wall along America’s southern border with Mexico has carried Donald Trump to his remarkable victory in the Republican primaries for president. Now it’s time to put that promise into the official Republican Party Platform.

Many would be surprised to learn that a border security fence or wall was not already in the Republican platform. After all, President George W. Bush signed the Secure Fence Act, which Congress passed in 2006 with the support of many Democrats, including then-Senators Barack Obama and Hillary Clinton.

In the 10 years since Bush signed that law in a staged photo-op, the government has actually built only 36 miles of secure double fencing instead of the 700 miles authorized by that bipartisan, high-profile law. As a result, our southern border is penetrated daily by wave after wave of drug smuggling, human trafficking, people with incurable or infectious diseases such as the Zika virus, and even Muslims and Chinese people who somehow made their way to Mexico.

Business lobbyists and the U.S. Chamber of Commerce, who hold too much influence in the Republican Party, oppose a wall because it would interfere with their continued exploitation of cheap foreign labor at the expense of American workers. In addition to tolerating the flow of illegal labor, the Chamber wants to expand every category of visas for foreign workers, both skilled and unskilled.

According to Politico, Republican power brokers have convened “as many as 10 closed-door huddles with business lobbyists to discuss the party’s platform.” Attendees were warned not to discuss details with the press, but you can bet that building a wall was not on their agenda.

The big-business lobbyists also expressed alarm at Trump’s promise to “discourage companies from moving jobs outside the United States.” One participant said his colleagues are “pretty much aghast” at Trump’s proposals to protect Americans against rampant cheating by our so-called “trading partners.”

House Speaker Paul Ryan, meanwhile, has been developing his own agenda for Republicans in an effort to compete with Trump’s. Under the slogan “A Better Way,” Ryan’s proposals include old chestnuts like cutting taxes, entitlements and regulations, but nothing about limiting immigration or the hemorrhage of jobs to foreign countries.

The Ryan agenda is basically the same as what Jeb Bush and 15 other failed presidential candidates campaigned on, but those ideas obviously didn’t sell to the Republican electorate. The voters have spoken, and the future of the Republican Party starts with a wall along our southern border.

Even some members of the Republican National Committee are resisting the wall as a political statement that belongs in the party platform. One RNC member called the wall “a symbolic thing” rather than “a physical thing,” while another member said the border wall is not to be taken “literally” because “it is a metaphor.”

The two RNC members are right that the border wall would be a powerful symbol, but only if and when it is actually built. Once completed, the wall on our southern border would stand as a “metaphor” for the fact that coming to America requires the invitation and permission of the American citizens who are already here.

The 2012 platform has many good provisions, including opposition to “any form of amnesty” and support for states using their authority to enforce federal immigration laws. But building a wall is now the foundation of Republican immigration policy — and yes, Mexico will pay for the wall.

Yet the Chamber of Commerce calls it a “myth” that “building a wall along the U.S.-Mexico border, and deporting all undocumented immigrants from the United States, would enhance national security.” The Chamber’s analysis asserts that a border security wall would cost between $15 and $25 billion to build, and not even $1 billion to maintain, but those are small sums compared to the real costs of illegal immigration.

The federal, state, and local costs of criminal justice to process and incarcerate criminal aliens is at least $15 billion a year, not to mention the harm caused by those crimes, such as horrific crashes that have occurred when smugglers drive the wrong way on freeways at night with their headlights turned off. Even deportation is not as expensive as opponents of border security pretend.

A wall along the border would reduce illegal immigration and cause real wages to increase for average American workers for the first time in more than a decade. That may not be something the U.S. Chamber of Commerce wants for big business, but it’s something that would attract American workers to vote Republican.