Resisting Obama’s Transgender Directive: A Hill to Die On

David Limbaugh May 19, 2016 Commentary Comments Off on Resisting Obama’s Transgender Directive: A Hill to Die On 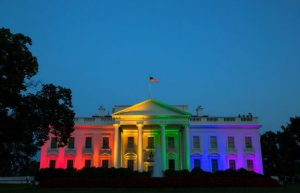 To achieve its political ends, the left doesn’t just assault the Constitution through the appointment of liberal activist judges; there are a variety of other leftist abuses, such as politicizing the departments of Justice and Education.

In its mission statement, the Justice Department states that one of its aims is “to ensure fair and impartial administration of justice for all Americans.”

That goal underscores cherished principles of American jurisprudence and the Constitution, including the preamble’s commitment to “establish Justice,” the Constitution’s guarantee of equal protection under the law and the rule of law itself.

Justice is supposed to be blind, in the sense of impartiality and being free from political influences. The rule of law ensures that we have a government of laws, not men — meaning that no one is above the law and everyone should be treated equally. The law must be fairly applied and enforced, or it will cease to function as a safeguard of rights and a guarantor of justice.

The political left subscribes to these principles only by lip service, if at all, because its overarching goal is to accomplish its policy goals, irrespective of the damage it does to the very process that guarantees our liberties.

This is why the left, without remorse, appoints results-oriented, activist judges, whom they view not as protectors of the Constitution and law but as vehicles to advance its political agenda by any means necessary, including twisting the meaning of constitutional and statutory provisions and often inventing rights out of whole cloth. It’s why it doesn’t even blink when one of its own usurps legislative authority and issues lawless executive orders in contravention of the people’s will, even while knowing he has no constitutional authority to do so. It’s why it deliberately refuses to enforce immigration laws. It’s why it blackmails state governments, through the threat of withholding funds, into doing the will of the federal government. It’s why it privately applauds the use of the IRS to target its political opponents. And it’s why it stacks the Justice Department with radical leftists whose mission to effect changes in policy supersedes its duty of ensuring the fair and impartial administration of justice.

As such, it’s no surprise that the Obama administration has issued an edict barring “discrimination” against students based on their “gender identity.” The Department of Justice and the Department of Education each announced that “both federal agencies treat a student’s gender identity as the student’s sex for purposes of enforcing Title IX.”

Understand that with Title IX of the Education Amendments of 1972, Congress never intended “sex” to include “gender identity.” The purpose was to ensure women and girls equal treatment under the law. No one in his wildest imagination conceived that lawless public officials would later contort the statute to prevent discrimination against transgender people.

The administration proclaims, “Gender identity refers to an individual’s internal sense of gender.” So forget your biological makeup; if today you want to identify as a woman, men, you may, and if people refuse to go along with the ruse, they will be punished with the full force of federal law.

Specifically, the administration’s directive last week requires every public school in the nation to provide transgender students access to all activities and facilities consistent with their gender identity, at the risk of losing federal funds.

The Framers are rolling over in their graves, not just because of this inversion of moral standards but also because of the lawless manner in which this is being forced down the throats of the states, the American people and the public schools.

President Obama knows he doesn’t have the legal authority to issue such an order, but he is determined to create as much chaos as he can and to unilaterally impose his iron will to the fullest extent before his term expires.

No one will convince me that this has anything to do with the rights of transgender people. Rather, Obama and his fellow leftist tyrants are seeing how far they can push the envelope — how much they can fundamentally transform America against the people’s will and against the protections guaranteed by the federal and state constitutions.

The Obama administration obviously cares not a whit for the privacy of students who don’t want to be forced to share a restroom with students of the opposite sex. The rights of the many will be subordinated to the rights of the very, very few — not to protect the rights of those few but to manufacture rights that don’t exist to make an authoritarian statement on behalf of Big Brother.

Folks, there has to be a tipping point — a point at which we’ll no longer tolerate this kind of tyranny, even if it means the states’ forgoing blood money from the federal leviathan.

This is a hill to die on, and if the sane states don’t fight back on this one, we might as well just completely surrender the republic today. It’s either that or eventually seeing the people rise up in a way we haven’t witnessed for many years.

Previous From the Archives: Protecting the Second Amendment
Next Can Bill Clinton Help Hillary With the ‘Black Vote’?