The shooting incident at Umpqua Community College would have been so different if someone else in that classroom had a gun. The murderer might have killed fewer people or none if an armed student opened fire on him.

But the college required students to agree not to carry guns on campus.

Sheriff David Clarke recently appeared on Fox News to speak his mind on gun control. President Barack Obama seizes the chance to push gun control whenever there’s a mass shooting, but he remains oddly silent at shootings that go on every week in places like Chicago.

The sheriff said he’s tired of hearing lectures from someone with a platoon of “armed individuals” to protect his family (and rightly so) “while he expects the rest of us at ground level,” average, ordinary citizens to outsource their personal safety to the government.

Get rid of so-called gun-free zones, Sheriff Clarke added. Concealed-carry license holders should be able to “play a role in their own safety.” Can you imagine cowering while a homicidal thug takes his time and shoots people? Just one armed citizen could have taken him out before he got off a shot. Why would the government want to hamstring law-abiding people and render them defenseless in this way? Criminals aren’t going to obey gun laws.

“These gun-free zones have become killing fields,” the sheriff said.

Previous Facts Don't Work on Gun Control, So Obama Uses Emotion
Next Calls For More Gun Control After Oregon Shooting Have Backfired In A HUGE Way

What Must Happen Before We Can Fix Medicare and Medicaid? 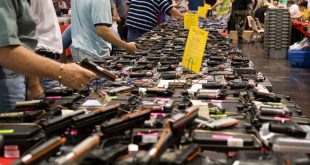 Leftists will not be pleased with this. Governor Ron DeSantis of Florida last week announced …