Star Parker: Political Agenda Must Be About Disruption, Not Change

Star Parker November 13, 2019 Commentary Comments Off on Star Parker: Political Agenda Must Be About Disruption, Not Change

American voters are motivated by a fever pitch.

The headlines were the Democratic sweep of the state legislature in Virginia that put the entire state government under Democrat control for the first time in 25 years and the defeat of incumbent Republican Gov. Matt Bevin in Kentucky.

An important part of the story is that voter turnout was off the charts.

In Kentucky, an estimated 43% of eligible voters turned out compared with 31% for the last gubernatorial election, in 2015.

Voter turnout in Virginia was the highest it has been for a state legislature-only election in at least the last 40-some years.

There’s a lot of noise in the political and cultural arenas in America today, and it’s exactly what I talk about in my new book, released this week, “Necessary Noise: How Donald Trump Inflames the Cultural War and Why This is Good News for America.”

A new Gallup poll measuring voter enthusiasm reports that 64% are “more enthusiastic” compared with previous elections, a percentage “among the highest Gallup has measured across presidential election years.”

It’s actually the highest ever measured because previous levels in this range were reported one to five months before upcoming election. Voter enthusiasm at this accelerated level one year before an election is unprecedented.

Also unprecedented is that high voter enthusiasm is bipartisan.

As Gallup reports, usually enthusiasm is notably higher among the opposition party.

But this time, it’s not the case.

Reported enthusiasm is 66% among Republicans and 65% among Democrats.

It’s not a surprise to me. It’s why I wrote “Necessary Noise.”

The noise that is ramping up voter heartbeats is the sound of American democracy at work. It’s a consciousness-raising noise that is waking up Americans to the fact that muddling through the mediocre middle is no longer an option. And the man responsible for generating this noise is President Donald Trump.

Donald Trump is the great disruptor.

Political candidates always run on an agenda of change.

But Donald Trump understood that given what is happening in America today, the agenda must be disruption, not change.

Change does not take place at the roots. The change conventional politicians offer up amounts to rearranging deck chairs. Disruption reaches down deep and severs at the root the status quo kept in place by special interests and habit of thought.

America needs this kind of disruption today because we have drifted too far from our founding, too far from what the nation is supposed to be about.

An America that grew and thrived because it was “biblical and free” is transforming into a nation that is “secular and statist.”

There is no better way to know what Americans are thinking and feeling than to travel and talk to people.

This is what I have been doing for 25 years. It’s why I know that the people who voted in 2016 for the disruptor Trump are those who have had enough with where we’ve been going. They are the people of America’s heartland, and I have been listening to them.

Now, as result of disruption, the pretentions of the mediocre middle are gone. Because of Trump the disruptor, Americans will have a clear choice to make.

Part of the drama of the effectiveness of Donald Trump is that his own background and personal history provide an unlikely resume for the role he now plays. It’s why so many still have a hard time with him.

As I point out in “Necessary Noise,” the process of disruption produces the noise we need, whether it’s draining the swamp of interests in Washington; taking on the politics of political correctness, gender and race; or restoring a society of ownership and property.

The only thing I can predict for sure is that come November 2020, Americans will have a clear choice, and for this we should thank Donald Trump. 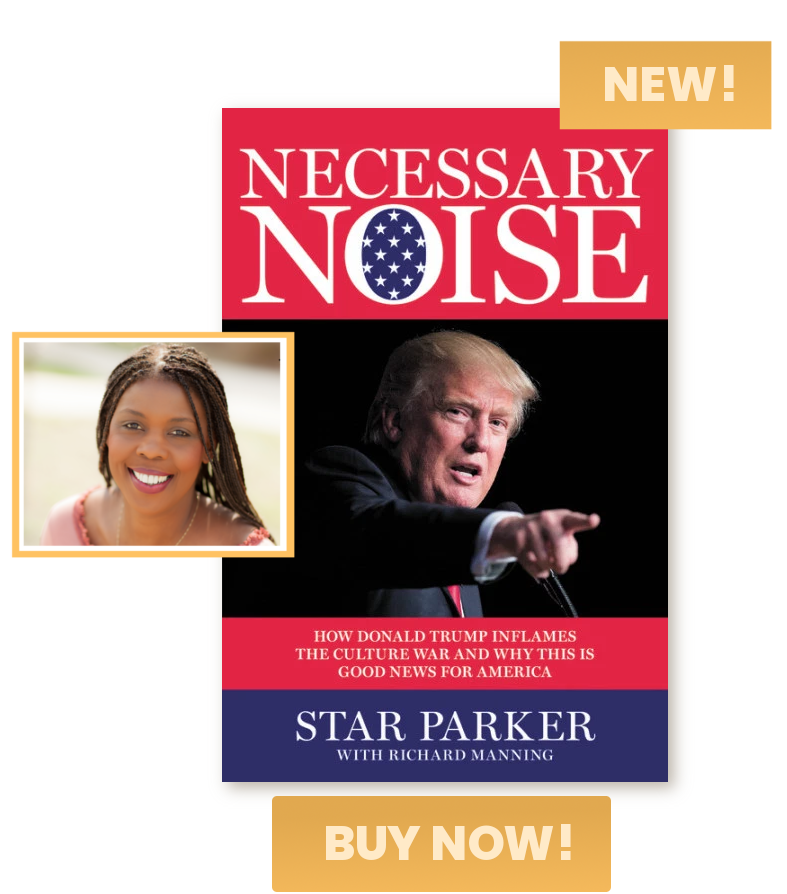 Previous Star Parker’s New Book: Why the Political ‘Noise’ Surrounding Trump is Necessary
Next California’s Homeless Problem is About More Than Housing