Syrian Showdown: Trump vs. the Generals

Pat Buchanan April 9, 2018 Commentary Comments Off on Syrian Showdown: Trump vs. the Generals 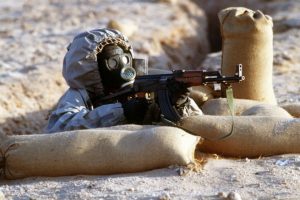 With ISIS on the run in Syria, President Trump this week declared that he intends to make good on his promise to bring the troops home.

“I want to get out. I want to bring our troops back home,” said the president. We’ve gotten “nothing out of the $7 trillion (spent) in the Middle East in the last 17 years. … So, it’s time.”

Not so fast, Mr. President.

For even as Trump was speaking he was being contradicted by his Centcom commander Gen. Joseph Votel. “A lot of good progress has been made” in Syria, Votel conceded, “but the hard part … is in front of us.”

Moreover, added Votel, when we defeat ISIS, we must stabilize Syria and see to its reconstruction.

Secretary of State Rex Tillerson had been even more specific:

“It is crucial to our national defense to maintain a military and diplomatic presence in Syria, to help bring an end to that conflict, as they chart a course to achieve a new political future.”

But has not Syria’s “political future” already been charted?

Bashar Assad, backed by Iran and Russia, has won his seven-year civil war. He has retaken the rebel stronghold of Eastern Ghouta near Damascus. He now controls most of the country that we and the Kurds do not.

According to The Washington Post, Defense Secretary James Mattis is also not on board with Trump and “has repeatedly said … that U.S. troops would be staying in Syria for the foreseeable future to guarantee stability and political resolution to the civil war.”

Saudi Crown Prince Mohammad bin Salman, who fears a “Shiite corridor” from Tehran to Baghdad, Damascus and Beirut, also opposes Trump. “If you take those (U.S.) troops out from east Syria,” the prince told Time, “you will lose that checkpoint … American troops should stay (in Syria) at least for the mid-term, if not the long-term.”

Bibi Netanyahu also wants us to stay in Syria.

Wednesday, Trump acceded to his generals. He agreed to leave our troops in Syria until ISIS is finished. However, as the 2,000 U.S. troops there are not now engaging ISIS — many of our Kurd allies are going back north to defend border towns threatened by Turkey — this could take a while.

Yet a showdown is coming. And, started starkly, the divide is this:

Trump sees al-Qaida and ISIS as the real enemy and is prepared to pull all U.S. forces out of Syria as soon as the caliphate is eradicated. And if Assad is in power then, backed by Russia and Iran, so be it.

Trump does not see an Assad-ruled Syria, which has existed since the Nixon presidency, as a great threat to the United States. He is unwilling to spill more American blood to overturn the outcome of a war that Syria, Iran and Russia have already won. Nor is he prepared to foot the bill for the reconstruction of Syria, or for any long-term occupation of that quadrant of Syria that we and our allies now hold.

Once ISIS is defeated, Trump wants out of the war and out of Syria.

The Israelis, Saudis and most of our foreign policy elite, however, vehemently disagree. They want the U.S. to hold onto that slice of Syria east of the Euphrates that we now occupy, and to use the leverage of our troops on Syrian soil to effect the removal of President Assad and the expulsion of the Iranians.

The War Party does not concede Syria is lost. It sees the real battle as dead ahead. It is eager to confront and, if need be, fight Syrians, Iranians and Shiite militias should they cross to the east bank of the Euphrates, as they did weeks ago, when U.S. artillery and air power slaughtered them in the hundreds, Russians included.

If U.S. troops do remain in Syria, the probability is high that Trump, like Presidents Bush and Obama before him, will be ensnared indefinitely in the Forever War of the Middle East.

President Erdogan of Turkey, who has seized Afrin from the Syrian Kurds, is threatening to move on Manbij, where Kurdish troops are backed by U.S. troops. If Erdogan does not back away from his threat, NATO allies could start shooting at one another.

As the 2,000 U.S. troops in Syria are both uninvited and unwelcome, a triumphant Assad is likely soon to demand that we remove them from his country.

Will we defy President Assad then, with the possibility U.S. planes and troops could be engaging Syrians, Russians, Iranians and Shiite militias, in a country where we have no right to be?

Trump is being denounced as an isolationist. But what gains have we reaped from 17 years of Middle East wars — from Afghanistan to Iraq, Syria, Libya and Yemen — to justify all the blood shed and the treasure lost?

And how has our great rival China suffered from not having fought in any of these wars?

Patrick J. Buchanan is the author of “The Greatest Comeback: How Richard Nixon Rose From Defeat to Create the New Majority.”

Previous Why the Left Wants to Muzzle Laura Ingraham
Next Report: U.S. Confirmed Israel Informed Washington in Advance of Air Strikes in Syria