BCN Senior Editor October 5, 2017 U.S. News Comments Off on The Civil Rights Act of 1964 Doesn’t Include Protection for This 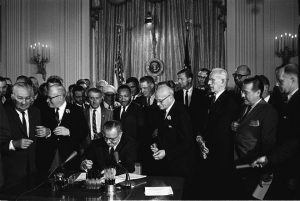 The previous administration attempted to redefine Title VII of the Civil Rights Act of 1964 to add “gender identity” to protections extended to race, color, religion, and national origin against discrimination.

The Trump administration is set to reverse that directive, according to the Hill. An excerpt:

In a memo to U.S. attorneys dated Wednesday and obtained by BuzzFeed, Sessions said that the Justice Department will no longer interpret Title VII of of the Civil Rights Act to mean that the law’s protections extend to discrimination based on gender identity.

Sessions wrote that it is the responsibility of the Justice Department to interpret the law “as written by Congress” and that the existing text does not explicitly prohibit discrimination based on gender identity.

The Civil Rights Act of 1964 originally passed to protect black Americans from racial discrimination in education, employment, and public accommodations, and also barred discrimination based on sex, religion, and national origin.

After This Christian School Filed a Lawsuit Over Biden’s ‘Gender Identity’ Mandate, the Admin Approves Lunch Money Funding for Its Low-Income Students