The Moral of the Simone Biles Story

Mona Charen August 12, 2016 Commentary Comments Off on The Moral of the Simone Biles Story 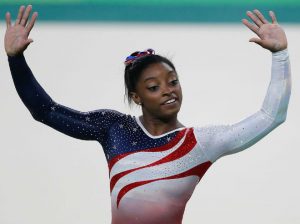 We know that America is feeling like a cancer patient at the moment. Doctors explain that there are only two options: amputate a limb or go through chemotherapy, which might save the limb, but also might kill us. We shuffle around in a daze, scarcely believing that there are no good exits from this house of mirrors.

So, in the spirit of escapism from our national crisis, let’s turn to the Olympics. It’s not that the Olympics have exactly been a beacon of righteousness through the years. In 1936, Adolf Hitler did his best to make the games an infomercial for the “master race.” (Jesse Owens and the American men’s rowing team did their bit to deflate him.) In 1972, Avery Brundage disgraced the U.S. and the IOC by comparing the murder of 11 Israeli athletes to the exclusion of Rhodesia from the competition. And in 2002, in Salt Lake City, an ice-dancing judge admitted that she had been pressured to vote for the Russians and did so.

This year, the entire Russian team could have been barred from the games for doping, but somehow the IOC wiggled out of enforcing the rules and permitted 271 of Russia’s original team of 389 to compete. So Russia cheated but paid little price. China, too, has entered athletes who cheat. (Individual Americans have been found guilty of doping as well, but not as a team or a matter of national policy.)

Here’s the good part (glad you hung in there): Some of the athletes themselves have shamed the Russians and Chinese. Australian swimmer Mack Horton expressed contempt for his drug-convicted rival Sun Yang, saying, “I don’t have time for drug cheats.” French swimmer Camille Lacourt was even more blunt: “They should make up their federation of dopers and have fun among themselves. It disgusts me to see people who’ve cheated standing on podiums. Sun Yang, in the 200 free, he pees purple.”

American Lilly King, a sophomore from Indiana University who won gold in the 100-meter breaststroke, wagged her finger at Russian Yulia Efimova, who served a 16-month suspension for doping, as if to say, “You don’t get to call yourself No. 1 when you cheat.”

OK, we’re not completely away from politics, because one of the major party candidates for president this year is a notorious liar and cheat (well, both are, when it comes to that) and rather than pay a price in derision or shame, she has profited from her perfidy. It offends one’s sense of justice and seemliness.

So it’s good to see a little public shaming of cheaters — even if nothing comes of it, even if the Chinese and Russian teams return in four years with six arms and six legs each and get a pass from the IOC — because millions of people worldwide know and most still despise frauds.

Another story the Olympic athletes can teach us is about families. Simone Biles has been described as the greatest gymnast in the world, perhaps the greatest gymnast in history. She is a 4-foot-9 blend of rocket fuel and fairy dust. Along with the other women (and men) who do their magic on vaults, rings, bars and beams, she stretches our understanding of what muscle, sinew and bone can do. Like cats, gymnasts seem to be made of elastic.

It is inconceivable, though, that however much natural talent, determination and championism (my neologism for the psychological toughness it takes to be a successful competitor) Simone Biles was born with, she would never have made it past junior high gymnastics without the support of her adoptive parents. No champion, far less a world-beater like Biles, can hope to achieve her goals if left to wilt in foster care. Her biological grandfather and his wife, though they had already raised two boys to adulthood, couldn’t let that happen to Simone and her sister. So they started over with young children, becoming Dad and Mom again. And as good parents do, they went all in — the gymnastics lessons, and the travel, and the home schooling, and the emergency room visits, and the care not to neglect the sister, and the whole exhausting, exhilarating ride.

Biles’ story is not typical. Once-in-a-generation athletes are anything but typical. But her family story is becoming more common. In 2010, the U.S. Census reported, 4.9 million American children were being raised solely by their grandparents. That’s nearly double the number from 2000. It was the softest of landings for the spirited Simone Biles. She has much to teach about the blessing of adoption, the meaning of love and the irreplaceable institution of the family.

Pat Buchanan: Biden’s America — One Nation or Us Versus Them?