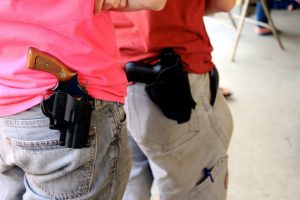 The U.S. Court of Appeals for the Ninth Circuit handed down a ruling that people on both sides of the gun-control argument might find shocking.

The Ninth Circuit, which leans left, blocked the president of the United States from exercising his authority to restrict immigration in the interests of the nation’s security last December.

A three-judge panel recently rejected the Trump administration’s request to lift an injunction on its proposed ban on men openly pretending to be women, and vice versa, from serving in the U.S. Armed Forces.

But the same court just made its second pro-Second Amendment decision in a month.

A resident of Hawaii applied to openly carry his handgun, and the state twice turned him down. He sued, and his case reached the federal appeals court. A three-judge panel ruled on Tuesday that the Second Amendment gives citizens the right to openly carry their guns in public for self-defense.

“We do not take lightly the problem of gun violence,” Judge Diarmuid O’Scannlain wrote in Tuesday’s ruling. “But, for better or for worse, the Second Amendment does protect a right to carry a firearm in public for self-defense.”

State Attorney General Russell Suzuki said the ruling would “undermine Hawaii’s strong gun control law and our commitment to protect the public.” He added that state and local authorities would consult on what further action to take.

The 9th Circuit ruled in 2016 that the Second Amendment did not guarantee a right to carry concealed firearms in public in a case originating in Southern California. The U.S. Supreme Court declined to rule on that decision last year.

The case likely will reach the U.S. Supreme Court, which ruled in 2010 that the Due Process Clause of the Fourteenth Amendment incorporates the Second Amendment right recognized in the court’s 2008 District of Columbia v. Heller decision.