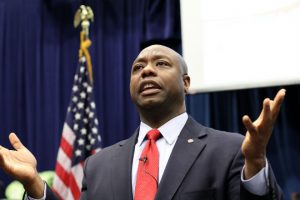 The best question from a journalist for the man and woman running for president is this: In the area of race relations, why can’t we get it right? All your life, Mr. Trump, all your life, Mrs. Clinton, we have been trying to solve what divides America. Why can’t we?

Give them time to breathe, space to answer. Don’t lean in with that reporter-face that signals, “You’ve got 18 seconds, and near the end I’ll interrupt to show how probing and alert I am.”

Don’t do that. Give them time. In that time they will be forced to think aloud. If they change the subject, that will say worlds. If they don’t have thoughts to share that will tell us a lot too.

Beyond that, even though everyone on media asks for a conversation about race, most of them don’t really mean it. They don’t want a conversation but a platform. They want to talk and for you to listen. And they want what’s said to be circumscribed—they want narrow barriers put on acceptable limits of thought and experience.

So people turn away and everyone simmers.

But three good men this week were having a conversation, not with each other but with the country. And they said three big things:

You don’t know what it is to be a black man.

You don’t know what you’re asking of the police.

And, I’m trying to process everything in my heart.

Tim Scott, 50, the first African-American U.S. senator from South Carolina, spoke on the floor of the Senate about what it is to be him, and black.

Previous The Fight For Justice Is a Battle Over Hearts Not Hashtags
Next Podcast: Conservative Shirley Husar On Race Relations