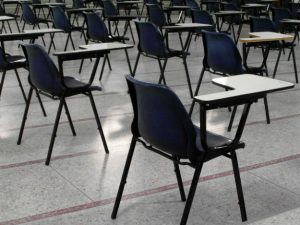 U.S. Senate Minority Leader Chuck Schumer said in a statement, “The president’s decision to ask Betsy DeVos to run the Department of Education should offend every single American man, woman, and child who has benefitted from the public education system in this country.”

Expressing similar sentiments, Congressional Black Caucus Chairman Cedric Richmond said, “I expect that Mrs. DeVos will have an incredibly harmful impact on public education and on black communities nationwide.” Those and many other criticisms of Department of Education Secretary Betsy DeVos could be dismissed as simply political posturing if we did not have an educational system that is mostly mediocre and is in advanced decay for most black students.

In 2014-15, graduation rates at District of Columbia Public Schools, just as they did nationally, climbed to an all-time high. At H.D. Woodson High School, 76 percent of students graduated on time; however, just 1 percent met math standards on national standardized tests linked to the Common Core academic standards. Just 4 percent met the reading standards.

The low black academic achievement is not restricted to high-school graduates of D.C. schools. The average black high-school graduate has the academic achievement level of a white seventh- or eighth-grader. As such, it stands as unambiguous evidence that high schools confer diplomas attesting that students can read, write and compute at a 12th-grade level when in fact they cannot. That means they have received fraudulent high-school diplomas. There are many factors that affect education that educators cannot control. But they have total control over the issuance of a diploma.

Educators often complain that there’s not enough money. Census Bureau data show that as early as 2009-10, Washington, D.C., spent $29,409 per pupil (http://tinyurl.com/gp4ht8k). Starker proof that there’s little relationship between spending and academic proficiency is in the case of Detroit’s public schools. In 2009-10, the nation’s elementary and secondary public school systems spent an average of $10,615 per pupil. According to the Census Bureau, Detroit schools spent $12,801 per pupil. The Mackinac Center for Public Policy claims that Detroit actually spent $15,570 per pupil that year. There’s not much payoff for education dollars. The National Institute for Literacy found that 47 percent of the city’s adults are “functionally illiterate.” The Nation’s Report Card reports that Detroit students score the lowest among the nation’s big-city schools, and Washington is not far behind.

I’d ask Sen. Schumer how it would be possible for Secretary of Education DeVos to make education any worse than it is for many Americans. I’d suggest to Rep. Richmond that if the grand wizard of the Ku Klux Klan were the secretary of education and wanted to sabotage black academic achievement, he couldn’t find a better method for doing so than keeping our public school system as it is. Many black politicians and educators would never have their own children attend the rotten, dangerous schools that are so much a part of our big cities. Many black parents, captured by these schools, would like to get their children out. But that’s not in the interest of the education establishment, which wants a monopoly on education. Black politicians and academics are the establishment’s facilitators. That explains their hostility to Betsy DeVos. She would like to give more parents a choice.

Previous WATCH Alveda King: This Is Why ‘Many’ Blacks Don’t Like Trump
Next Trump Should Pursue Compassionate Immigration Policy