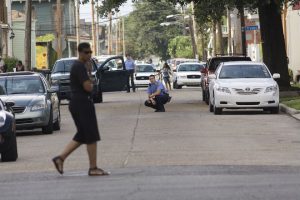 The Chicago Tribune reported a big drop in violence in Chicago this past weekend. Forty people were shot.

This down from the weekend before, when 74 were shot.

The Tribune’s Steve Chapman rejects what he calls the “popular myth, cynically promoted by Trump and other outside critics” that Chicago is an “exceptionally dangerous city.”

Whether or not we call this violence “exceptional,” it is certainly unacceptable. It should concern us all, particularly its racial characteristics.

He continues, “Those areas owe their plight largely to a sordid history of systematic, deliberate racial discrimination and violence, endemic poverty, and official neglect over the years.”

For sure, misguided government policies have contributed to this sad state of affairs. But these policies were supposed to help these communities, not destroy them.

Policies, such as excessive taxation and government housing, that have fostered indifferent absentee landlords and crime-ridden neighborhoods.

Let’s recall that the unfairness that blacks had to deal with in America’s history was unequal treatment under the law. This is what needed to be fixed, and this is what was fixed in the Civil Rights Act in 1964.

The problem was that liberals wanted to use their agenda not to fix the law but to change the country. And in the name of racial fairness, the era of big activist government, financed with oceans of taxpayer funds, was born.

But government can’t fix anybody’s life. It can only make sure that the law protecting life, liberty and property is applied fairly and equally.

The beginning of big activist government fostered the demise of personal responsibility.

The perpetrators, and victims, of violence in Chicago and other urban areas are largely young black men. They mostly come from homes with no father and from communities where this reality is the rule rather than the exception.

Making a child is not hard to do. Raising a child and conveying the values and rules that make for a successful life and responsible adulthood is. Particularly now that popular culture largely dismisses these truths. And in black communities, politics and media is dominated by the left, whose message for them is that life is unfair because of racism and the answer is big government.

President Donald Trump is doing his job. We have robust economic growth that we haven’t seen in years, with unemployment rates at record lows.

Black leaders need to start doing their job and convey that marriage, work, education and personal responsibility are the only things that will fix black America.

Previous WATCH: Benefits of Carrying the ‘Black Card’ — And What Happens When You Refuse to Use It
Next These Conservative Women Challenged Socialist Alexandria Ocasio-Cortez to Debate — Here’s What Happened