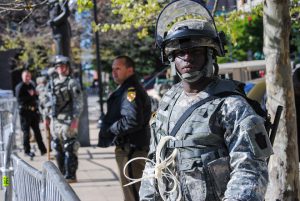 I wish the cops in charge of babysitting the protests that occurred around the country last night had job applications to pass out to the crowds. I suppose the protesters never considered that maybe the Black Lives Matter movement, with their anti-cop sentiments, may be responsible for the overreaction of cops toward blacks. Think about it. If a domestic movement waged a war on you, wouldn’t you be hyper-vigilant?

So what needs to happen in order to de-escalate the tension between blacks and cops? Here are a few suggestions:

1. Except in the extremely rare cases of blatant racism, don’t jump to conclusions before all of the facts and evidence are in. Each case is different. Believe it or not, more whites are fatally injured annually by cops than blacks, according to the Centers for Disease Control and Prevention (CDC). Common sense dictates that cops go where the crime is in order to protect law-abiding citizens. Unfortunately, predominantly black and low-income areas have high crime rates. If you grew up in the ‘hood like me, you know it’s true.

2. Secondly, their needs to be mandatory and perpetual police training, perhaps quarterly, on the proper use of force with a firearm, using as many scenarios as possible. I can’t tell you how many officers have told me that many of their colleagues don’t bother going to the range as often as they should. Every officer needs to be confident with his or her weapon. Police officers confront more evil in one week than most of us will see in our lifetime. Therefore, it’s understandable that some will react in fear, rather than in an abundance of caution. However, once that adrenaline gets pumping, the officer that is able to naturally fall back on his training will be able to perform his job admirably more times than not.

3. It’s time for us to shame divisive Democrats and left-wing media members who attempt to exploit police officer shootings during an election cycle for political advantage. Shouts of racism and gun control before the facts are weighed incite more violence upon good cops, like we witnessed in Dallas, who just want to make it back home to their families at the end of the day just like you and I do. We can’t demand that cops protect us from criminals, no matter their ethnicity, only to scrutinize every tactical procedure. That’s armchair quarterbacking. Most of us don’t have a clue how we’d react if we thought our lives were being threatened.

4. Lastly, cops must begin recruiting heavily within the communities they work in. Granted, this will be particularly difficult to do in black communities where people are taught cops are the enemy. Nevertheless, no one knows a community better than a person who has grown up in it. They are less likely to overreact to non-violent offenders than college graduates who have been plopped into ‘hoods they simply don’t understand. If your first encounter with a non-violent suspect is when you’re pointing your gun at him, chances are you’re too late to make a community better.

Most cops deserve our prayers, not our scorn. If black lives really matter, it’s time for blacks to work together with cops to weed out the criminals from the citizens so that we all can live peacefully together.

Previous The Clarence Thomas Story: An American Masterpiece
Next The American Evolution