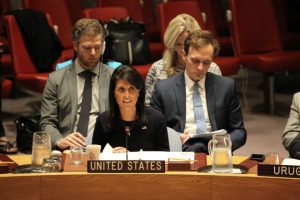 Haley’s remarks were made at the Heritage Foundation, as she reiterated the United States’ reasons for leaving the Council, as announced last month. She boldly stated on Wednesday: “Judged by how far it has fallen short of its promise, the Human Rights Council is the United Nations’ greatest failure… The United States provided the last shred of credibility that the Council had, but that was precisely why we withdrew.”

Defending Israel and again exposing the UNHRC’s bias and corruption, she said, “More often the Human Rights Council has provided cover not condemnation for the world’s most inhumane regimes. The Human Rights Council has been not a place of conscious but a place of politics. It has focused its attention unfairly and relentlessly on Israel,” while it has “ignored the misery inflicted by regimes in Venezuela, Cuba, Zimbabwe and China.”

Haley addressed Agenda Item 7, which calls for Israel’s “human rights abuses” against the Palestinians be a constant agenda item for each Council meeting. In late June of this year, Western and many European states boycotted the debate, an additional sign of growing support for the Jewish state at the U.N.

Haley again condemned Agenda 7, stating Wednesday “No other country — not Iran, not Syria, not North Korea — has an agenda item devoted only to it. Agenda Item 7 is not directed at anything Israel does, it is directed at the very existence of Israel.”

The U.S. confirmed last month that it would leave the Council. “For too long, the Human Rights Council has been a protector of human rights abusers, and a cesspool of political bias,” Haley said.

Previous Jim Jordan, Brett Kavanaugh, and Journalism by Innuendo
Next Russian Bots vs. Media/Academia/Hollywood — Which Had A Bigger Impact On The Election?