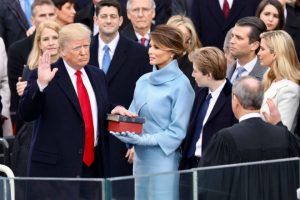 Overreach. Donald Trump seems to have an uncanny knack for prompting overreach by his opponents and critics. This often hurts him and the country. But it has the potential to hurt those doing the overreach as well.

Start with Trump’s speech in Warsaw last week. “As the Polish experience reminds us,” he said after recounting in vivid detail how Poland rebounded from decades of horrors, “the defense of the West ultimately rests not only on means but also on the will of its people to prevail. The fundamental question of our time is whether the West has the will to survive.”

Vitriolic criticism was quick to come from the left. “A statement of racial and religious paranoia,” wrote the Atlantic’s Peter Beinart. “The West is a racial and religious term,” he explained. An “alt-right” speech, said the New Republic’s Jeet Heer, “meant to conjure blood-and-soil nationalism.”

But Trump’s text included praise of Poland’s and Western civilizations’ resistance to Nazi and Communist totalitarianism, empowering women, striving for excellence, valuing the dignity of human life, debating and challenging “everything.” Presumably, Trump’s critics embrace each of these products of Western civilization.

Nonetheless they sneer at Trump’s pledge to oppose “another oppressive ideology — one that seeks to export terrorism and extremism all around the globe.” But that threat of Islamic terrorism is real.

Trump was speaking for those, like Britain’s Douglas Murray in his book “The Strange Death of Europe,” who fear that European leaders’ welcome of millions of unvetted Muslim “refugees” threatens to degrade and perhaps destroy the liberal achievements of the West. That is not racism, but prudence.

To maintain the opposite, to advocate entirely open borders, is not only problematic politically, but also as public policy. In the weeks since Trump spoke, Western eminences not considered illiberal have questioned the wisdom of allowing unlimited immigration to the West by peoples in African countries whose populations, according to United Nations projections, are set to zoom far above European levels.

To call these statements “racism” or “dog whistles” to “white nationalists” is nonsense.

This week’s lead story about Donald Trump Jr.’s June 2016 meeting with a Russian apparatchik revived the meme of Russian “collusion” and provoked similar overreach. This meeting, which included campaign manager Paul Manafort and son-in-law Jared Kushner, seems to have been a waste of everyone’s time, and it’s easy to argue that it was ill-advised.

But Democratic politicians and bloggers, who haven’t given up on dreams of somehow ousting Trump from office and who are eager as always to delegitimize his presidency, have gone further.

Some have argued that attendance at the meeting violates a federal criminal statute prohibiting foreigners from giving “money or other thing of value” to a federal or state campaign.

That’s obviously a stretch. People involved in campaigns get information every day from foreign sources — starting with the Daily Mail website — which could conceivably help their cause. Common sense tells us this is not criminal behavior.

Senator Tim Kaine, who until the evening of last Nov. 8 had reason to believe he would soon be vice president, goes further. “We’re now beyond obstruction of justice in terms of what’s being investigated. This is moving into perjury, false statements and even potentially treason,” he said this week.

This overeagerness to find a smoking gun ignores the fact that the Constitution’s standard for impeachment and removal from office is not the criminal code but “high crimes and misdemeanors” — breaches of the public trust serious enough that two-thirds of senators feel justified in overriding the results of a presidential election.

That standard was not met in 1999, when most Republicans believed Bill Clinton’s lies under oath — clearly a criminal offense — justified removal, but most Democrats believed his misbehavior was irrelevant to his official conduct.

There’s no bipartisan consensus now that Trump should go. And there’s obvious political peril, as House Minority Leader Nancy Pelosi has recognized, in Democrats’ campaigning not just for a check on the president — the usual off-year opposition theme — but for a futile 1999-style impeachment trial. Overreach is not usually good politics.

Previous The ‘Secret’ Speech Jeff Sessions Gave to a Group of Christian Lawyers
Next A Challenge to Energy Dominance: There’s No Free Market for Oil