Are Unborn Babies Alive? Then They Must Be Protected Under the U.S. Constitution. 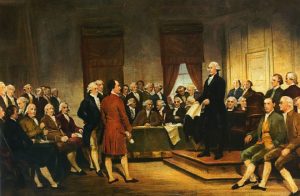 As we enter into what surely will be another contentious confirmation process for a new Supreme Court justice, let’s consider underlying realities that deeply divide us and make it so hard to agree about how our Constitution should be interpreted and applied.

The Declaration of Independence lays the groundwork for us.

It tells us that all men are endowed by their Creator “with certain unalienable rights, that among these are life, liberty, and the pursuit of happiness. — That to secure these rights governments are instituted among men.”

The important news here, if you accept the founding document of our nation, is that human rights are not created by government. They precede it. The point of government is to build a fence around and protect these rights — these truths — articulated in the Declaration.

Regarding life, the Declaration tells us that the role of government is to protect it.

This explains the rancor surrounding Roe v. Wade and legal abortion that is becoming center stage to our court confirmation deliberations.

Legal abortion is, at its core, about whether unborn children should be included in what we consider mankind. If yes, they must be protected, like all life.

The “pro-life” movement is clear on this. The unborn child is living and must be protected.

Where’s the other side coming from?

Most telling is from then-candidate Barack Obama, who told Pastor Rick Warren, in response to Warren’s question, at what point “does a baby get human rights?” that the answer “is above my pay grade.”

President Obama was an aggressive advocate for abortion and was the first sitting president to address the annual meeting of Planned Parenthood, where he concluded his remarks with “God Bless You.”

He was comfortable invoking the blessings of God for the nation’s largest abortion provider despite his candor that he has no idea whether abortion means taking human life.

Recently, Maine Republican Senator Susan Collins expressed dismay at border security policies that separate children from their parents. Collins called this “traumatizing to children, who are innocent victims, and it is contrary to our values in this country.”

At the same time, Collins says she will not support a Supreme Court nominee “who demonstrated hostility to Roe v. Wade.”

I ask Collins, is the unborn child, who has a heartbeat and can feel pain, not also an innocent victim? Does Collins not find this violence on life also “contrary to our values in this country”?

Perhaps Collins finds taking a position on whether the unborn child is human life, like Obama, above her pay grade.

Collins, and others, tell us that Roe v. Wade is “settled law” and therefore now intrinsically part of American life. To overturn it, they say, would create intolerable disruptions. I reject this bogus idea.

If you believe the unborn child is living, that life must be protected under the U.S. Constitution.

Several years ago, Lord Jonathan Sacks, former Chief Rabbi of the United Kingdom, spoke at the Humanum colloquium on complementarity at the Vatican. He began his remarks, which received a standing ovation, saying he would speak about “the most beautiful idea in the history of civilization: the idea of the love that brings new life into the world. … Life begins when male and female meet and embrace.”

As we move forward to confirm a new Supreme Court justice, let’s remember that although our Constitution was constructed by men, it was designed to protect and preserve principles from a higher place.

Abortion is a symptom of, not the cause of, the tensions and confusion in our nation. Our real problem is the abandonment of our society to the crass, gross ideas of an empty and false materialism that can only take us to oblivion.