Aubrey Shines: From Christ to Emancipation, the Mob Is Determined to Erase History

We’ve all heard the phrase, “The road to hell is paved with good intentions.” But, as I’ve watched the unrest that continues to play out in our cities, I think it’s safe to say that the “activists” who have taken over left the good intentions behind some time ago.

First, they came for only the Confederate statues. Then they came for our Founding Fathers, and now they’re coming after President Lincoln, General Grant, and even our Savior Jesus Christ.

In case you don’t know what I’m referring to, last month Shaun King, who is a prominent voice in the Left’s Woke class, called for the removal of any statues of Christ with European features because, apparently, those too are now a symbol of white supremacy.

As a minister, it pains me to see such an asinine and narrow view of the Messiah. Not only is it shortsighted, but Mr. King is missing the entire point of Christ. What He may or may not have looked like doesn’t matter, but His message about love and reconciliation with others does.

Christ walked the earth 2,000 years ago. None of us can ever know what the Savior actually looked like. Logically, it’s reasonable that different cultures would depict Him in a way they would know. White Europeans aren’t any guiltier for depicting Jesus as a white European in Renaissance art than Africans or Asians are for portraying Him as an African or an Asian in their artwork. Moreover, the Messiah’s message has nothing to do with the pigmentation of one’s skin. In His time on earth, Jesus extended God’s love to both Jews and Gentiles. Samaritans, Romans, it didn’t matter.

Furthermore, what Mr. King suggests is the next step on an already dangerous path. Statues of Christ are found on the grounds of churches, and churches are separate entities from the government (look it up, it’s in the Constitution). This means Mr. King wants his Antifa friends to trespass on private property to destroy other private property. I would be shocked, but these people see themselves as revolutionaries; they live by their own rules, and no amount of reasonable discourse will stop them.

And if statues of Christ that look too white have to come down, how long will it be before statues of Abraham, Moses or Jacob have to come down if they look too white? Does this mean Michelangelo’s historic sculpture of King David needs to be destroyed because it looks too white? How long will it be before any white statues come down, regardless of whether or not the person in question enforced white supremacy?

I fear that last question is already being answered. We’ve already had a statue of General Grant ripped down. Didn’t he bring an end to the Civil War by forcing Robert E. Lee to surrender? He, if anyone, should have a thousand statues up for every one Confederate statue. Grant ended the war and saved the Union. But because he is a 19th-century white man with a beard in a military uniform, he must come down! So say the misguided who ignore their own history.

The statue of Teddy Roosevelt, one of the greatest conservationists in American history, is being removed from in front of the New York Museum of Natural History. The reason? Roosevelt is apparently more prominent than the adjacent statues of a Native American and African American. This must mean Roosevelt only stood for imperialism and the patriarchy, never mind the fact we would not have our national parks were it not for him. Oh, and he was the first president to entertain a black man for dinner in the White House, namely Booker T. Washington.

The mob even wants to attack the legacy of Abraham Lincoln, without whom there would be no Emancipation Proclamation. The Emancipation Memorial, a statue of Lincoln helping a freed slave to his feet, has stood by the White House since 1876. The mob’s excuse for this one is that the statue endorses “white saviorism,” even though the statue was funded by ex-slaves. If they stopped screaming and listened for a moment, maybe the misguided young folks trying to trample President Lincoln’s legacy would realize this.

If Mr. King and his ilk insist on this path of destruction, I ask him to remember that Christ’s message is about forgiveness. He and the Antifa thugs tearing our country apart will always have a chance to be forgiven, even as they try to erase our history. I hope he knows this. I will be praying for him to understand it. 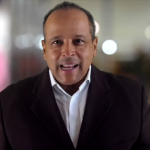 Bishop Aubrey Shines is the founder of Glory to Glory Ministries and chairman of Conservative Clergy of Color.