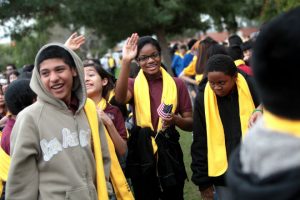 In reference to efforts to teach black children, the president of the St. Petersburg, Florida, chapter of the NAACP, Maria Scruggs, said: “The (school) district has shown they just can’t do it. … Now it’s time for the community to step in.” That’s a recognition that politicians and the education establishment, after decades of promises, cannot do much to narrow the huge educational achievement gap between Asians and whites on the one hand and blacks on the other.

The most crucial input for a child’s education cannot be provided by schools or politicians. Continued calls for higher education budgets will produce disappointing results, as they have in the past. There are certain minimum requirements that must be met for any child, regardless of race, to do well in school. Someone must make the youngster do his homework — and possibly help him with it. Someone must ensure that he gets eight hours of sleep. Someone must feed him wholesome meals, including breakfast. Finally, someone must ensure that he gets to school on time, behaves in school and respects the teachers. If these minimum requirements are not met — and they can be met even if a family is poor — all else is for naught.

Scruggs says that it’s time for the black community to accept part of the blame. Part of the problem is the lack of parents’ involvement in their children’s education — for example, their not attending parent-teacher nights. Having children’s books around the house and reading to preschoolers is vitally important. According to Mariah Evans, who headed a 20-year worldwide study that found “the presence of books in the home” to be the top predictor of whether a child will attain a high level of education, “one of the things that is most striking … about it is that the book’s effect appears to be even larger and more important for children from very disadvantaged homes.” By the way, one doesn’t have to be rich to have books around the house. Plus, there are libraries.

One vital measure for community involvement in black education is that of preventing youngsters who are alien and hostile to the educational process from making education impossible for everybody else. That can be accomplished by ignoring politicians and the liberal vision that restricts schools from removing students who pose severe disciplinary problems. The problem goes beyond simple misbehavior. An article in Education Week last year, titled “When Students Assault Teachers, Effects Can Be Lasting,” reported: “In the 2015-16 school year, 5.8 percent of the nation’s 3.8 million teachers were physically attacked by a student. Almost 10 percent were threatened with injury, according to federal education data” (http://tinyurl.com/y7ndtyom).

Given the huge educational achievement gap between blacks and whites, one might ask whether black people can afford to allow students who have little interest in being educated to make education impossible for others. Students who assault teachers ought to be summarily removed from the school. One might ask, “Williams, what are we going to do with those expelled students?” I do not know, but I do know one thing for sure: Black people cannot afford to allow them to remain in school and sabotage the educational chances of everyone else.

The educational achievement gap between blacks and whites is hidden from black students and their families. All too often, a black student with a high school diploma cannot read, write or compute at a sixth- or seventh-grade level. This tends to make high school diplomas held by blacks less valuable in the eyes of employers. As such, it sparks racial division where it otherwise would not exist. There have been complaints that police and fire departments and other civil service jobs don’t have many black employees. The problem is that to get hired in the first place — and get promoted if hired — one needs to pass a civil service exam. If one’s high school diploma is fraudulent — meaning he has not mastered the 12th-grade levels of all subjects — he is seriously handicapped.

I say hats off to the vision being promoted by the NAACP’s Maria Scruggs. She and her supporters have their work cut out for them, but it’s doable.

Previous WATCH: Here’s How House Democrats Might Overplay Their Hand During the Next Two Years
Next This Court Just Refused to Dismiss a Christian Baker’s Lawsuit Against the Government

Star Parker: Traditional Values Have Collapsed — Will Republicans Step Up to the Challenge?

For sure, Democrats rejoiced as they watched Republicans painfully twist in the wind at the …