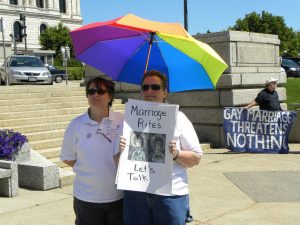 Graphic designer Lorie Smith, a Christian, filed a lawsuit against Colorado in September over a law she said would force her to use her artistic talents to promote what the Bible teaches is a sin.

Under the state’s so-called non-discrimination law, Christian business owners like Smith would have to refrain from explaining to prospective clients why they won’t provide services for homosexual “weddings.” An excerpt (PDF) from the complaint:

7. Colorado law makes it unlawful for Lorie and 303 Creative to publish, display, or mail any communication stating that they will not design, create, or publish websites celebrating same-sex marriages. See Colo. Rev. Stat. § 24-34-601(2)(a).

8. Colorado law also makes it unlawful for Lorie and 303 Creative to publish, display, or mail any communication indicating that a person’s patronage at 303 Creative is “unwelcome, objectionable, unacceptable, or undesirable” because of sexual orientation. See Colo. Rev. Stat. § 24-34-601(2)(a).

Imagine a black business owner being penalized for explaining why he won’t provide services for KKK-theme weddings and parties. You can’t? Well, you’re not supposed to, because he’d be applauded, not punished. But Christians? Low-hanging fruit in this anti-Christian climate.

Smith has no complaint filed against her, nor has she been sued. Alliance Defending Freedom (ADF), her legal counsel, said her suit against the state is known as a “pre-enforcement challenge” against laws that threaten individuals’ rights.

Two Christian filmmakers decided to file a sort of pre-enforcement challenge as well. Christian Headlines reported that Carl and Angel Larsen challenged a Minnesota law that might force them to provide services for homosexual “weddings.”

“The human rights department has been very aggressive stating on their website and in various other official proclamations that they intend to enforce the law,” ADF lawyer Jeremy Tedesco said. “A law that has criminal penalties as part as what they could face, fines and even jail time as possible penalties.”