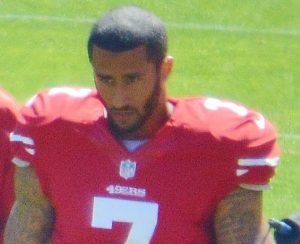 As someone who stands during the National Anthem (raised by a Jim Crow vintage grandmother who always stood on arthritic knees and nerve-damaged feet when it played on TV ), I’m not angered by NFL player Colin Kaepernick’s refusal to stand during this national tradition.

He said of this national tradition, “I am not going to stand up to show pride in a flag for a country that oppresses black people and people of color.” Young men his age, regardless of wealth, often air a ” Mississippi Burning ” view of America, as if the country has made no progress. It’s part of a calculated hostility that must be deleted.

Grandma, my late grandfather, and my mother were public school educators. They didn’t earn millions as professional football quarterbacks. The America they grew up in denied that coveted position to athletes from our strand of the American fabric. They experienced real oppression and put it in context: they rejected bias without rejecting America.

That’s my choice, too. I never accept discrimination but also put it in context. This context allows me to stand and recite the Anthem without a hint of feeling that I’m endorsing racial wrongdoing.

I’ll stand for Colin Kaepernick, too. In a Republic, you’re even free to disrespect it and all who created opportunities you clearly have seized.

His refusal to stand during the National Anthem gives my decision to stand added meaning. I know how far we’ve come each time I stand.