School choice is a civil rights issue. Like those who fought against school segregation over half a century ago, President Trump is committed to ensuring that all American children receive a quality education, regardless of race or ZIP code.

“The next step forward in building an inclusive society is making sure that every young American gets a great education and the opportunity to achieve the American Dream,” the president said during his third State of the Union address, adding that too many students “have been trapped in failing government schools” for far too long.

As a parent and a member of the black community, I know exactly how hard it can be to ensure that our children are getting quality education, especially for families who reside in low-income communities. Millions of African American students have been completely betrayed by our education system over the years, forced to attend failing government-run schools where underachievement and bullying are the status quo. If I didn’t have the means to pay for private education, my daughters would have endured that very fate.

This doesn’t have to be the case. In addition to private schools, there are charter schools all over the country that can provide the education our children aren’t getting from neighborhood schools. Several states have programs to help low-income families take advantage of these options, but there aren’t enough scholarships to go around, and children in states without school choice programs are left out entirely. HR 1434 would provide federal tax credits to encourage individuals and corporations to contribute to scholarships that would make this proven solution available to families across the country, empowering parents to choose the best education possible for their children, even if they live in economically distressed communities.

Democrat leaders in Congress, however, have kept the Education Freedom Scholarships and Opportunity Act in legislative limbo for nearly a full year, and Democrat politicians have fought vociferously against similar initiatives in the states.

Fortunately, President Trump was willing to call them out directly for their efforts to stymie school choice. After highlighting the fact that state-level Opportunity Scholarship programs are unable to accommodate tens of thousands of worthy students, the president announced that one of those forgotten children, Janiyah Davis, and her single mother, Stephanie, were in the audience.

“Janiyah’s mom … would do anything to give her daughter a better future,” he said. “But last year, that future was put further out of reach when Pennsylvania’s governor vetoed legislation to expand school choice for 50,000 children.”

The president then delivered one of the most powerful and heartwarming lines of an address that was already packed with emotional resonance: “Janiyah, I am pleased to inform you that your long wait is over,” he said. “I can proudly announce tonight that an Opportunity Scholarship has become available, it is going to you, and you will soon be heading to the school of your choice.”

If you didn’t catch this memorable moment live, I urge you to see it for yourself here. Every American child deserves to be as happy and excited as Janiyah was that night. Every American student deserves to know that they are worthy of receiving a good education in a safe environment.

This video is you all you need to know about the Democrat Party.

Watch as Dems remain seated as @realDonaldTrump awards an Opportunity Scholarship to a 4th grader.

Incredibly, this righteous cause didn’t melt the hearts of President Trump’s political opponents, who sat in stony-faced silence as he gave a young black girl hope for a better future. House Speaker Nancy Pelosi later tore up her copy of the President’s address, seemingly disgusted by his commitment to empowering formerly-forgotten Americans like Janiyah.

School choice is more than just an education reform — it’s a matter of civil rights. Every parent in the country should applaud President Trump for standing up for our right to decide what is best for our own children. 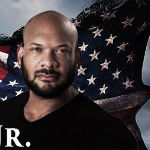 David Harris Jr is a fellow of the Falkirk Center, Founder/CEO of Uncorked Health & Wellness, Inc., and the author of “Why I Couldn’t Stay Silent.”