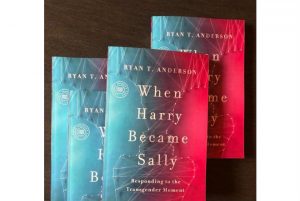 When secular leftists express frustration at how practicing Catholics (their humble servants) and evangelicals could have ever voted for Donald Trump, the first thing they refuse to concede is the horror of the alternative.

They refuse to admit that Hillary Clinton clearly, forthrightly stood for abortion on demand, at any time, for any reason and even supported having it funded by pro-life taxpayers. It’s what she and her husband called “safe, legal and rare.” Clinton and her crew even dismissed the videotaped discussion of Planned Parenthood’s dead-baby-organ-selling grotesqueries as somehow fictional. And they refuse to admit that Clinton represented the creeping extremism of the LGBT movement, with its emphasis on redesigning all the nation’s bathrooms, not to mention human nature.

Dr. Ryan Anderson of The Heritage Foundation has a new book called “When Harry Became Sally: Responding to the Transgender Moment.” He explains that you can see the swift descent into the denial of reality by reviewing tracts of the Human Rights Campaign. In 2005, it declared that transgender people “identify” as something that “does not match their physical sex.” And with that the bottom fell open.

By now, the HRC (not to be confused with Hillary Rodham Clinton, though HRC is HRC’s best spokeshuman) expresses an intolerance for the idea that we should speak of “real” or “biological” men and women. Its website says: “Contrasting transgender people with ‘real’ or ‘biological’ men and women is a false comparison. They are real men and women, and doing so contributes to the inaccurate perception that transgender people are being deceptive when, in fact, they are being authentic and courageous.”

There is so much Orwell packed into that last sentence. Hiding your penis or your breasts is not “deceptive” — it’s “authentic”? Christians see all this as pretzeled logic. You simply cannot deny the reality of the Creator’s design without going into tortured explanations like that. There’s an easier out, of course. Just deny His existence — and it all falls into place. So they become their own God and redefine humanity according to their own whims. Those whims then become “authentic.”

The denial of gender reality frightens people — yes, even many liberals — and it should. Anderson said in a Weekly Standard interview that his liberal friends are suggesting the transgender activists are walking into a backlash because their deconstructionist agenda is just … that.

One friend pointed out a viral video “in which someone who describes herself as a an ‘intersectional feminist,’ a ‘queer girl,’ etc., declared that having ‘genital preferences’ is transphobic, and that ‘preferences for women with vaginas over women with penises might be partially informed by the influence of a cissexist society.'”

We don’t really know what that means. Anderson added, “this was not satire.”

His liberal friend objected to being called transphobic because he only dates biological women. The folks who fought for “sexual freedom” now say you can’t have “genital preferences”? You can’t just tolerate transgender individuals; you must date them? Lecturing lesbians and saying they’re bigots if they don’t want “women with penises” doesn’t exactly bode well for keeping the LGBT together.

Anderson’s book is dismissed as “hate speech,” and let’s not kid ourselves: The LGBT folks would like to ban a book like this, especially when he discusses that which they wish were silenced. He writes that 41 percent of people who identify as transgender attempt suicide. Death by suicide is 19 times more likely to happen for people who have had the “joy” of transition surgery. They have gender dysphoria, and Christians should respond with compassion.

But the LGBT crowd sees it otherwise. It defines compassion as meeting all of its demands, including requiring every insurer to pay for gender-confirmation surgery and every Catholic hospital to perform it. Worse yet, it demands its ideology be taught to children, confusing and scaring millions of them about the simplest undeniable facts about who they are.

That’s a strong reason for the churchgoing conservatives to look past Trump’s “Access Hollywood” braggadocio and affairs from before he became a politician and vote against the extremism — the evil extremism — that Hillary Clinton endorsed.