Frederica Wilson — All Hat, No Decency 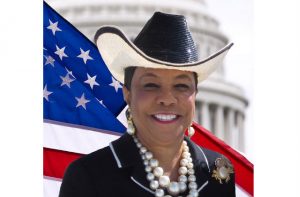 Texans have a saying for people who talk big but act small: All hat, no cattle. It’s hard to think of someone better fitting that description than Rep. Frederica Wilson, the Florida Democrat with a multitude of colorful hats but no decency.

Sgt. La David T. Johnson died fighting for his country and our freedoms. Sadly, there is nothing anyone can say to his widow, Myeshia Johnson, to take away her pain. Even a president who could movingly express the American people’s sense of loss—think President Ronald Reagan’s speech after the Challenger space shuttle disaster—couldn’t restore family members’ personal loss.

President Donald Trump tried and didn’t succeed with Ms. Johnson. Neither is to blame. She had just received the worst news imaginable. He wasn’t trained for such a difficult task.

But why is Big Hat Wilson involved? She said she was “horrified” by what the president said. Of course, she’s a liberal activist. Anything he said would have horrified her. It’s hardly news when she trashes the president.

In fact, she is an experienced practitioner in the politics of demagoguery. The Rhinestone Cowgirl took advantage of an earlier tragedy—the shooting of Trayvon Martin—to score political points. No one benefited from her attempt to exploit his unfortunate death.

Now, she’s using the same tactic again, only this time taking advantage of the death of American soldiers confronting terrorists in the nation of Niger.

They were there on the sort of mission that has become increasingly common under Presidents George W. Bush, Barack Obama, and Donald Trump. No one likes putting U.S. military personnel in harm’s way. For a president, there is no tougher decision. And if anything goes wrong, the president is going to be blamed.

But we all know the world is a dangerous place. Better to stop terrorists early than allow them to destroy foreign societies—before moving on to strike America.

Even if the Rhinestone Cowgirl could not avoid hearing the call, it’s outrageous that she make political hay out of it.. She should know better. White House Chief of Staff John Kelly said he was stunned: “I thought that at least that was sacred.”

Like most Americans, he remembers, he said, as “a kid growing up, a lot of things were sacred in our country.” Women, life, religion, as well as Gold Star families. “I just thought the selfless devotion that brings a man or woman to die on the battlefield, I just thought that that might be sacred,” Kelly added.

He knows of what he speaks, having lost a son in Afghanistan.

Kelly first recommended that the president not make those calls, because nothing is more emotionally difficult. But when the president insisted, Kelly suggested that President Trump point out that Sgt. Johnson understood the choice he was making and died doing what he believed in. The president tried to express the message that the sergeant “is a brave man, a fallen hero, who knew what he was getting into because he enlisted, and he was exactly where he wanted to be,” Kelly said. Those sentiments had comforted him in his own time of extreme grief.

But the showboat congresswoman went on the attack against Kelly as well as the president. She made a predictable charge of racism after Gen. Kelly said she was like “empty barrels making the most noise.” Really?

Maybe that tactic works in her Miami district. But it shouldn’t be treated seriously anywhere else. The phrase probably goes back to the Greeks, who talked about “empty vessels.” That sounds a lot like all hat, no cattle to me.

It’s about bad people, not race.

But No Decency Wilson didn’t stop there. She told the ever-gullible New York Times: “The White House itself is full of white supremacists.” Where are they, one wonders? In the closets and under the beds?

The Rhinestone Cowgirl just smeared hundreds of conservative officials, highlighting the bankruptcy of the Left and bias of the media. It’s a cheap cop-out to blame race for every failure, real or perceived. And it makes white people the only vulnerable group.

But we’ve come to expect that from the political Left. It’s what they do.

President Trump maintains troops in Niger, and many other nations, to protect all of us. They do their job admirably, but, as we have seen, at great risk to themselves. To the president’s credit, when tragedy strikes, he seeks to console their families.

Then politicians like All Hat Wilson carp and complain.

Anyone is free to criticize the president. But most of us recognize that some things are sacred. That there are appropriate times and places for political discourse. Why can’t liberals like the Rhinestone Cowgirl do the same?

Previous This is Where Leftists Undermining America Have Had Their Greatest Successes
Next Has the Word ‘Racist’ Lost Its Power?

Star Parker: Give America a New Birth of Freedom in Virginia

Despite being a politician all his life, and never having worked in a blue-collar job, …