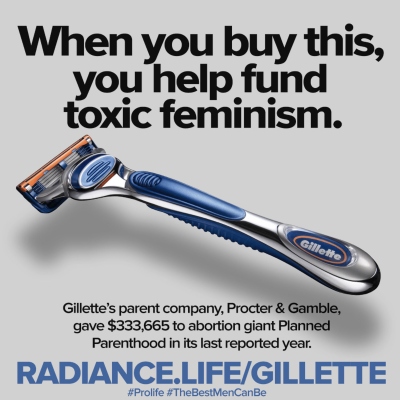 Virtue signaling is becoming America’s favorite pastime. It doesn’t take action, just a large ad budget to show the world you believe in something trendy.

Gillette, maker of razors that tear my face apart, has embraced the #MeToo movement and launched an ad to tell men—all men—to be better. Never mind Gillette’s parent company, Procter & Gamble (P&G), has funded “toxic masculinity” on networks that reek of it like MTV and BET. Ten years ago P&G executives wanted to know from the public if they should act morally and withdraw their ad dollars from those two networks which are still drenched in sex, violence and profanity. They needed a poll to see if they should act responsibly?

The constant attacks on men (straight men) is deliberate and dangerous. While social reengineers want to pretend that women and men are interchangeable, nothing goads a fake feminist (and her allied corporate entities) like masculinity. Toxic feminism sees men as the enemy. It sees all men as abusers. It constantly imagines a world without them. In today’s warped sense of feminism, men can do no right, and women can do no wrong.

One of the most destructive forms of (actual) “toxic masculinity” is when men reject their responsibilities as fathers, abandoning the life they helped to create. Toxic masculinity is doing nothing to stop the most defenseless from being bullied and killed by the leading source of toxic feminism—Planned Parenthood. Yet P&G (headquartered in Cincinnati) funds, through the Greater Cincinnati Foundation it co-founded, the violence of abortion. In the latest reported year, P&G empowered Planned Parenthood’s abortion business with $333,665 in donations; that’s $315,815 to Planned Parenthood of Southwest Ohio and another $17,850 to the Planned Parenthood Federation of America. (Go to 2ndvote.com to find out where corporate America funnels its money). It also gave a massive $865,225 to another population control entity, Population Services International, which heavily pushes abortion in poor countries.

People might argue, “but they also fund good organizations like the Salvation Army, schools, museums and World Vision.” If someone offered you a plate of delicious food, but three percent of it was tainted with toxic sewage, would you be praising the meal? No amount of beneficence makes up for the fact that you help fund the destruction of innocent human beings. What if just one of their recipients were the KKK? Would anyone argue that it doesn’t matter? Considering Planned Parenthood kills more black lives in 2 weeks than the KKK did in a century, it should matter. (FYI: Planned Parenthood’s founder, boasted in her autobiography about speaking at a KKK meeting, and many others like it. One of her most prominent Birth Control League—which was renamed Planned Parenthood–Board members, Lothrop Stoddard, was an “exalted cyclops” in the KKK. His deeply racist 1921 book, The Rising Tide of Color Against White World Supremacy, inspired the wretched NAZIS. So, there’s that.)

I’m all about real equality, from conception until death. As a father of two fearless princess warriors, I pray I show them every day that a man can be masculine, protective, loving, encouraging, vulnerable and unthreatened by a brilliant and strong women (their mama is exactly that). I’m tired of progressives thinking they have to demonize men in order to elevate women. We have no choice but to coexist. Literally, neither of us can exist without the other.

In a #TalkAboutBias ad P&G created to talk about race, it showed its own bias. In an ad where “black parents are discussing racism with their children over several decades,” fathers are only seen, not heard. It’s a world where men, apparently, have nothing to offer.

In a day and age when social justice warriors talk about the marginalized, they marginalize. When progressives talk about ending abuse, they abuse. When corporations give lip service to “equality,” they often—like P&G—fund the most violent form of inequality.

So, Gillette, #TheBestMenCanBe is far beyond your political hashtag. Can some men do better? Absolutely. Can some women do better? Absolutely. There are many men who protect the vulnerable, who teach their children that bullying is for the weak, who treat women with respect, who impart integrity and spiritual character, and don’t fit the stereotype you’re foisting onto all men. There are things more toxic than (leftist) societal perceptions of acceptable “masculinity.” And we see it in the nearly 1 million killed a year by an industry supported by your donations. Or, does that truth cut like a razor?

Previous Will Americans One Day Look Back in Disbelief That It Was Legal to Kill the Unborn As We Do Slavery?
Next Do Black Christians Undermine Their Values When They Vote for Liberals?