Guns and Knives vs. Ideas — Here’s What Matters More 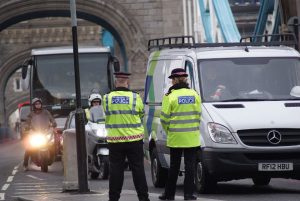 The BBC News reported [in early April] that the London murder rate has overtaken that of New York City:

“So far in 2018, the London Metropolitan Police department (the Met) has investigated 46 murders, compared with 50 in [New York City]. But, while New York’s murder rate decreased from the end of January, London’s rose markedly from that point. Ex-Met Police Chief, Leroy Logan says it is proof that ‘London’s violent traits have become a virus.’”

The BBC goes further: “Statistics from the New York Police Department (NYPD) and the Met police, which were reported this past week, highlight narrowing murder rates between the two cities, which have similar population sizes.”

More specifically, “In January, the Met investigated eight murders whereas the NYPD looked into 18 killings. By February, the NYPD’s figures had dropped to 11, while London’s rose to 15. In March, 22 murders were investigated in London while 21 inquiries were launched in New York. When the figures are weighted for population, the rate of murders per 100,000 people was higher in London than in New York in February and March. The Met said it was concerned at the increase in murders in London ”

Mr. Logan is quoted again as saying, “I cannot understand how things have gotten out of hand. We have seen the virus of violence spreading. It is endemic in so many different parts of societies.”

“We need a proper strategy that looks at all of the issues. Knife crime and violent crime acts like an epidemic, so you need to go in at the source to cut it off and then you need to inoculate the future young people against it. Going in at source means going into schools, changing the social norms, educating kids, teaching them what it is to be a man ”

Hmm. So, could it be that our cousins in the “gun free zone” across the pond just admitted that it’s not so much about the weapon held in the hand as it is about the ideas that are held in the heart?

It’s clear that ideas do matter. It’s equally obvious that some ideas differ from others in their moral direction and intent. For example, the ideas of a biblical worldview are quite different than those of secular materialism and they are also very different from those self-centered hedonism.

The ideas of Jefferson and Robespierre are quite different, as are those of Jesus and jihad. One worldview leads to fear; the other to freedom. One leads to repentance; the other to revenge.

Perhaps the most obvious lesson of the London story is this: When you expunge culture of its Judeo-Christian ethic — when you take away its Bible — that culture will inevitably bludgeon itself to death. Take away guns and we’ll use a knife. Take away knives and we’ll use a club. Take away clubs and we’ll use a rock. Take away the moral and ethical glue that binds a community together and it falls apart — one domino after another.

Disparage Christian morality and it will inevitably be replaced by the amorality of tolerance. Tolerance then becomes anarchy, which always leads to tyranny. Freedom is lost when you tear down the virtue’s fences. Get rid of the big laws and you do not get liberty but rather thousands of little laws that rush in to fill the void. Vacuums are always filled. A void of love will be filled with hate. Get rid of Christ and you get chaos and corruption.

The words from nearly a decade ago from Londoner Matthew Parris are somewhat haunting here:

“As an atheist, I truly believe Africa needs God. One [belief system] has been supplanted by another. Removing Christian evangelism from the equation may leave the continent at the mercy of the malign fusion of Nike, the witch doctor, the mobile phone and the machete.”

Perhaps Mr. Parris’ words were not just a warning for Africans a continent away but for Anglo Saxons in his own backyard. Could it be that the BBC and Mr. Parris have stumbled onto something (even though unwittingly)? An ancient truth? The very definition of what it means “to be a man”?

Could it be that the Brits just admitted that the predicate for human decency is not so much about the weapon that is held in the hand as it is the ideas that are held in the heart?

Previous Pompeo: A Proven Leader for the State Department
Next WATCH: Why This Abortion Advocate Was Nervous About Debating Abortion with Star Parker