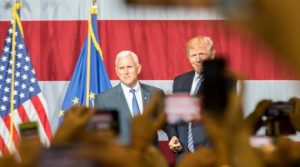 When Donald Trump introduced Indiana Governor Mike Pence as the vice presidential nominee, the media had a field day unearthing Pence’s past tweets and votes that appeared to disagree with his future running mate’s positions.  On issues such as free trade agreements, some of Pence’s past views seemed closer to those of his former colleague, House Speaker Paul Ryan, than his new running mate.

But on one of Trump’s signature issues — his opposition to the resettlement of Muslim refugees from Syria — the Indiana governor took Trump-style executive action even before Trump.  Way back on November 16, Governor Pence directed his state agencies to suspend payments to the agencies that profit by redistributing tax money to people from Syria.

Pence took that prompt and decisive action after it was revealed that at least one of the Muslim terrorists who massacred 130 people in Paris, France on November 13 had slipped into that country by posing as a Syrian refugee.  Pence also relied on the October 21 testimony of FBI Director James Comey before the House Committee on Homeland Security.

Comey told Congress that it’s simply not possible to vet Syrian refugees adequately because there are no reliable documents or databases for those people.  “We can query our database until the cows come home, but there will be nothing show up because we have no record of them.”

For Pence’s swift action to protect American citizens against the demands of foreigners, he was sued by one of the agencies that spends our tax money to resettle refugees.  On February 29, an Obama-appointed federal judge named Tanya Walton Pratt blocked Pence’s order on the absurd basis that he was discriminating against Syrian refugees on the basis of their national origin.

Governor Pence appealed the Obama judge’s decision on April 11.  Contrary to the claim that our government spends two years vetting Muslim refugees for terrorist sympathies before letting them in, Pence’s brief quoted an April 7 story by the Associated Press reporting “While the resettlement process usually takes 18 to 24 months, the surge operation will reduce the time to three months.”

Pence has tweeted his opposition to a complete Muslim ban, but he may change his mind by checking the polls.  A series of recent polls proves that most Americans strongly or somewhat support temporarily banning all Muslims from entering our country.

In just the last month, a Reuters/Ipsos poll, an NBC News-SurveyMonkey poll, a Morning Consult poll, and a Fox News poll all found that Americans support Donald Trump’s proposal even if they don’t support him.  These polls show that substantial numbers of Democrats, African-Americans, and people who voted for Obama in 2012 support a temporary ban on Muslims or people from Muslim-majority countries.

Those polls were completed before the most recent terrorist horror in Nice, France, which resulted in the mass murder of 84 and the injury of 200 more, when Mohamed Bouhlel intentionally ran over them with his truck.  The terrorist’s apparent targeting of women, children, and families as he drove his truck in zigzag fashion to kill them has horrified millions.

The threat of terrorism is not the only reason to stop the refugees, who are bringing tuberculosis (TB) in both its active and latent varieties.  TB is one of six “comeback” diseases that had been virtually wiped out in our country but are returning with refugees; the others are measles, mumps, whooping cough, scarlet fever, and bubonic plague.

The same judge ruled against another of Pence’s most important initiatives.  On June 30, she issued a preliminary injunction against an Indiana law signed by Governor Pence that bans abortion solely for the reason of the child’s sex, race or disability (including but not limited to Down syndrome).

In India and China, abortion of baby girls based on their gender results in a disproportionate number of births to baby boys.  This provides an additional reason to oppose immigration from these countries, because we do not want any immigrant groups that have far more men than women.

The same judge who blocked Pence’s proper actions concerning refugees and abortion also ruled in 2011 that Indiana could not stop tax money going to Planned Parenthood.  How does it happen that a single Obama-appointed judge can block the enforcement of a state legislature and governor?

Trump recently experienced firsthand the overreaching by federal judges when Supreme Court Justice Ruth Bader Ginsburg lashed out against Trump in comments that she has since expressed regret for saying.  Apologies aside, Justice Ginsburg’s comments illustrated how politicized the federal judiciary has become, and both Pence and Trump are on the same page in opposing the runaway federal judiciary.