Is Trump Right About the Crisis of Western Civilization?

Pat Buchanan July 12, 2017 Commentary Comments Off on Is Trump Right About the Crisis of Western Civilization? 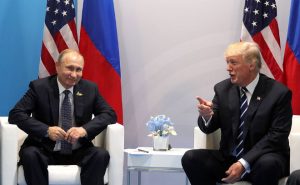 At the G-20 in Hamburg, it is said, President Trump was isolated, without support from the other G-20 members, especially on climate change and trade.

Perhaps so. But the crucial question is not whether Trump is alone, but whether he is right. Has Trump read the crisis of the West correctly? Are his warnings valid? Is not the Obama-Merkel vision of a New World Order a utopian fantasy?

At the monument to the patriots of the Warsaw Uprising, Trump cited Poland as exemplar of how a great people behaves in a true national crisis.

Calling the Polish people “the soul of Europe,” he related how, in the Miracle of the Vistula in 1920, Poland, reborn after 12 decades of subjugation, drove back the invading Red Army of Leon Trotsky.

He described the gang rape of Poland by Nazis and Soviets after the Hitler-Stalin pact. He cited the Katyn Forest massacre of the Polish officer corps by Stalin, and the rising of the Polish people against their Nazi occupiers in 1944, as the vulturous legions of Stalin watched from the safe side of the river.

When the Polish Pope, John Paul II, celebrated his first Mass in Victory Square in 1979, said Trump, “a million Polish men, women and children raised their voices in a single prayer. … ‘We want God.’ … Every Communist in Warsaw must have known that their oppressive system would soon come crashing down.” And so it did.

The crisis of the West today, said Trump, is akin to what Poland faced. For it is about the survival of a civilization, rooted in Christianity, that has made the greatest of all contributions to the ascent of man.

What enabled the Poles to endure was an unshakable belief in and a willingness to fight for who they were — a people of God and country, faith, families, and freedom — with the courage and will to preserve a nation built on the truths of their ancient tribe and Catholic traditions.

Given the threats to the West, from within and without, said Trump, we need such a spirit now. What are those threats?

“The fundamental question of our time is whether the West has the will to survive. Do we have the confidence in our values to defend them at any cost? Do we have enough respect for our citizens to protect our borders? Do we have the desire and the courage to preserve our civilization in the face of those who would subvert and destroy it?

“We can have the largest economies and the most lethal weapons anywhere on Earth, but if we do not have strong families and strong values, then we will be weak and we will not survive.”

Trump professed confidence in the West’s will to survive. But whether the West still has the character seems an open question.

Across the West, the traditional family has been collapsing for decades. Not one European nation has a birth rate that will enable its people to survive many more generations. Uninvited migrants in the millions have poured in — are pouring in — from Africa and the Middle East. The elite of Europe have been gladly surrendering their national sovereignties to transnational institutions like the EU.

Christianity is more of a dying than a thriving faith on the Old Continent. And as the churches empty out, the mosques are going up. Before our eyes, the West is being remade.

In June, gays and lesbians celebrated in Berlin as the German Parliament voted to approve same-sex marriage.

In Moscow, from May to July, a million Russians stood in lines a mile long to view and venerate a relic of the 4th-century bishop, St. Nicholas, on display in a glass case in the Cathedral of Christ the Savior, rebuilt under President Putin.

Liberated from Leninism, Russia returns to the old faith, as Germany returns to Weimar.

At that G-20 gathering in Hamburg, hundreds of criminal thugs went on a three-day rampage — rioting, burning, looting and battling police, some 300 of whom were injured.

Were the autocrats of the G-20 — Xi Jinping of China, Vladimir Putin of Russia, Recep Tayyip Erdogan of Turkey, Narendra Modi of India — impressed with the resolute response of Angela Merkel — the media-designated new “Leader of the West” — to mobs rioting in Germany’s second city?

At Harvard, Alexander Solzhenitsyn described what was on display in Hamburg: “A decline in courage may be the most striking feature which an outside observer notices in the West in our days. … Such a decline in courage is particularly noticeable among the ruling groups and the intellectual elite.”

Secularist and hedonist, New Europe worships at the altars of mammon. Handel’s “Messiah” cannot compete with moonwalking Michael Jackson’s “We Are the World.”

Once Europe went out to convert, colonize and Christianize the world. Now the grandchildren of the colonized peoples come to Europe to demand their share of their inheritance from a West besotted with guilt over its past sins that cannot say “No!”