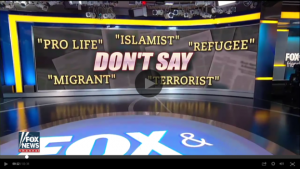 Pro-lifers are used to mainstream media calling pro-lifers “anti-abortion,” but it’s a term many embrace — despite liberals’ attempts to make us sound like crazy-eyed extremists.

Fox News reported on changes to the Associated Press’s stylebook for journalists. Among the changes: don’t call abortion opponents pro-life. Other changes include avoiding the words “terrorist” or “Islamist,” presumably even when the person in question is an Islamic terrorist. An excerpt:

She said if authors do not adhere to that style when they submit an article to a mainstream media outlet, they will likely see their words edited to conform.

“The mainstream media claims that it’s not biased, but it’s got this bias built into its own words,” [Rachel] Alexander said. “And we’re seeing these words increasingly scrubbed from news articles and replaced by politically correct words instead.”

She said it’s ridiculous to sanitize the English language and censor “conservative words.”

“It’s a bias against conservatives, and it’s getting worse every year,” Alexander said.

Writers using AP style were previously advised not to call illegal aliens “illegal aliens.” Even “illegal immigrant” and “undocumented” are too politically incorrect for liberals. So what are AP style writers supposed to call an illegal alien?

Previous Here’s How We Can Build a 21st Century American Labor Force
Next Is Trump Right About the Crisis of Western Civilization?