Anyone who understands the modern left could not be shocked by U.S. District Judge Derrick Watson’s issuance of a temporary restraining order against President Donald Trump’s executively invoked travel ban — but that doesn’t make the order any less outrageous. 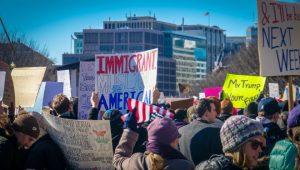 The ruling was not just an exercise in judicial tyranny, as many have commented, but an act of jurisprudential nihilism and anarchy. Courts are not policymaking bodies but judicial tribunals that decide actual disputes on the basis of the facts and the law.

Judicial activism overwhelmingly comes from left-wing judges, many of whom see their role as advancing a progressive policy agenda and exhibit little respect for the Constitution and rule of law when they might interfere with that agenda.

When President Trump issued his original travel ban, it was wholly predictable that some court would attempt to nullify it. In that case, its job was made easier by the arguable clumsiness of the rollout, even though most honest commentators believed that the underlying order passed constitutional muster.

Phony critics pretended the ban was stricken only because it was illegally crafted and opined that had Trump used greater care in composing the order, he would have faced no judicial obstacles. Others recognized this as a convenient excuse and said Trump would not be able to circumvent judicial obstruction merely by drafting a more precise order.

Alas, when the president issued a new order, it suffered the same fate as the first. Once a plaintiff was recruited for the cause, it wasn’t hard to find a court to eradicate Trump Travel Ban 2.0.

What was less predictable, though, was the transparent speciousness of the court’s reasoning in striking down Trump’s lawful order. A self-respecting judge would be embarrassed by this sophistry, unless he derived his professional self-concept from his devotion to political causes through bastardization of his sworn judicial oath.

Chief Justice John Marshall, in establishing the judiciary’s prerogative of judicial review in the 1803 case Marbury v. Madison, said, “It is emphatically the province and duty of the judicial department to say what the law is.” He did not say, “The judiciary is superior to the legislative and executive branches, and accordingly, we have the right to just make stuff up.”

Yet that’s precisely what Judge Watson did. He issued the temporary restraining order mainly because the executive order purportedly violated the establishment clause, which Watson reduced to this formulation: “The clearest command of the Establishment Clause is that one religious denomination cannot be officially preferred over another.” But even Watson admitted it is undisputed that the order “does not facially discriminate for or against any particular religion, or for or against religion versus non-religion.” So it’s not Trump’s executive order that arguably violates the establishment clause; it’s his alleged intent behind the order, which Trump supposedly revealed in his statements during the presidential campaign and otherwise concerning Muslims.

The judge says that to determine whether the order violates this clause, a court must apply the three-part “Lemon test.” To show it has not run afoul of the clause, the government action must satisfy all three prongs of the test: 1) It must have a primary secular purpose. 2) It may not have the principal effect of advancing or inhibiting religion. 3) It may not foster excessive entanglement with religion.

Watson concluded that the order fails the first test — the “secular purpose” prong — so a court wouldn’t even have to consider the other two tests. But it is painfully obvious that the primary purpose of Trump’s executive order is secular; he has exercised his sovereign duty to protect Americans and America’s national security interests. It is laughable and outrageous to suggest there was any other purpose — much less a religiously discriminatory purpose — to invoke the order.

On Page 32 of his 43-page screed, Watson cited the 9th U.S. Circuit Court of Appeals’ ruling that “official action that targets religious conduct for distinctive treatment cannot be shielded by mere compliance with the requirement of facial neutrality.”

But nothing in the order targets religious conduct for distinctive treatment! The order doesn’t address any aspect of Muslim religious conduct, unless Watson was arguing that terrorism is protected religious conduct. The ban applies to just six nations whose entrants are believed to present a higher risk of harm to the United States. This is not about religion but about national security. The five pillars of Islam are wholly unthreatened by Trump’s order.

Particularly disingenuous was Watson’s statement, on Page 36, that “any reasonable, objective observer would conclude … that the stated secular purpose of the Executive Order is, at the very least, ‘secondary to a religious objective’ of temporarily suspending the entry of Muslims.” This is astonishing, even for a radical jurist. No reasonable person — apart from a mixed-up, virtue-signaling leftist — would conclude that the stated secular purpose is secondary. If you’re going to consider Trump’s statements, he is nothing if not a national security hawk. Moreover, Americans who voted for him based on national security concerns see this order as a national security imperative. They know, even if pointy-headed leftist judges do not, that presidents have a duty to protect the United States and that the greatest threat to its national security presently is from terrorists. I repeat: There is no religious objective to this order at all, much less a primary one. It doesn’t apply just to Muslims, and it doesn’t “target religious conduct” of Muslims.

On top of all this, Watson conceded that to issue the temporary restraining order, he had to determine that the plaintiffs had met their burden of establishing a strong likelihood of success on the merits of their claim, yet he never explained how there is a small likelihood, much less a strong likelihood, of success, especially considering that this would be, according to liberal Harvard law professor Alan Dershowitz, a case of first impression.

The judge has written 43 pages of words — just words — designed to obfuscate the issue and justify the unjustifiable judicial usurpation of the sovereign power of the executive branch over national security.

This will not stand. Watson’s order cannot stand.

I recently came across the term “white-savior movies.” According to critics, this is a type …