Neither Candidate Is Getting the Immigration Issue Right

Michael Barone June 10, 2016 Commentary Comments Off on Neither Candidate Is Getting the Immigration Issue Right 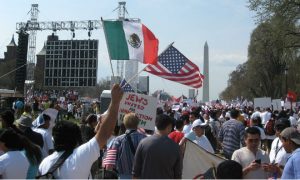 No contemporary political issue has been more controversial, or has been subject to more dubious analyses, than immigration.

Take Donald Trump’s endlessly repeated promise to build a wall along the U.S.-Mexico border. As I’ve pointed out, that is attacking a problem that no longer exists or that has diminished greatly. Net migration from Mexico to the U.S. was around zero between 2007 and 2014.

But Trump’s critics also miss something. Walls can actually work. The wall along the border near San Diego worked well enough a dozen years ago that many migrants crossed into the Arizona desert instead. It may not be feasible to build a wall along the Rio Grande in Texas, but the border there can be patrolled more effectively than it is now.

But it’s important also to understand how the flow of immigration has changed. Data from the Census Bureau’s American Community Survey has shown how the picture changed from the pre-recession years of 1998-2007 to the most recent two-year period, 2014-2015.

In the earlier period, immigration from Mexico averaged 429,000 a year, nearly one-third of total immigration. More recently, it averaged 170,000 a year, just 11 percent of the total. But immigration from the rest of Latin America has increased significantly, from 269,000 annually pre-recession to 439,000 most recently. That leaves total Latin migration down by some 90,000.

The ACS data does not categorize these immigrants by skill level. But past patterns suggests that current immigrants on average have higher levels of education and skills than was the case in the surge of immigration in the quarter-century from 1982 to 2007. In that respect it may resemble more closely the Ellis Island immigration of 1892-1914.

That suggests less need for a wall on the Mexican border. But perhaps not. The Census data don’t show how many non-Mexican Latin illegal immigrants make their way across America’s southern border. The surge of “children” from Central America across the border in summer and fall 2015 suggests that this number is substantial — and could grow much larger.

What should be done about this? Standard polling questions suggest most voters don’t want to see mass deportations of the estimated 11 million illegal immigrants. But veteran political reporter Thomas Edsall, blogging in The New York Times, notes that those polls don’t explain the resonance of Trump’s immigration stands. Edsall quotes Berkeley scholar Lefteris Anastasopoulos as saying that polls provide “a significant underestimation of the backlash against newly arriving immigrants and an overestimation of the support for immigration among the public.”

If that’s right, Hillary Clinton took a grave political risk by agreeing with Bernie Sanders and promising that she won’t deport “children” or any immigrants who don’t have criminal records. As Center for Immigration Studies Director Mark Krikorian writes, Clinton is “embracing what amounts to Angela Merkel’s immigration platform.”

Clinton was one-upping the Obama administration’s policy of letting illegal immigrants who claim to be “children” and their parents remain in the United States indefinitely. In effect she is calling for open borders, something that goes even beyond Barack Obama’s executive action, which has been ruled illegal by a Texas federal judge and appeals court.

There’s a strong argument for a revised immigration policy, like those of Canada and Australia, which would prioritize high-skill immigrants and reduce the number of low-skill people admitted under extended family unification provisions.

The reduced flow of migrants from Mexico and increased flow from South and East Asia is producing results closer to such a policy than what we saw during the 1982-2007 surge of immigration.

Trump’s incendiary statements don’t point directly toward that kind of immigration reform. But Clinton’s advocacy of what amounts to open borders for the unskilled points in the opposite direction — and it’s far from clear that’s what most voters want.

Previous Is This Why Tea Party Star Rep. Renee Ellmers Lost on Tuesday?
Next The Most Dangerous Place for Blacks…