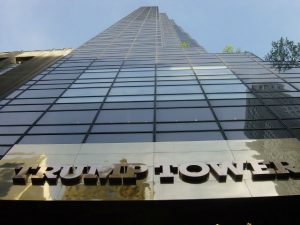 A year ago, in August 2015, this column called “The Donald” the Democrats’ Trump card. It is hard to imagine any other Republican candidate who could rescue a thoroughly discredited Hillary Clinton from a devastating defeat in this year’s election.

Now 50 prominent Republicans with foreign policy and national security experience have taken the unprecedented step of publicly and collectively announcing that they cannot vote for Donald Trump because they believe that he would be “the most reckless president in American history.”

Why? Not only because he has “demonstrated repeatedly that “he has little understanding” of the nation’s “vital national interests” but because “Mr. Trump has shown no interest in educating himself.”

His response to these criticisms has been completely predictable. Trump has not even tried to answer the charges or to assure the American people on something as important as their survival and the survival of this nation. Instead, there is the standard Trump tactic of launching unsubstantiated charges against his critics.

Even if all his charges against his critics were 100 percent true, that is no assurance to the American people on the vital issues they raised— and for which there are innumerable examples of Trump’s own words and deeds to make people worry about what he would do in the White House.

The strongest argument — indeed, the only argument — for voting for Trump is Hillary Clinton. For both candidates, the danger is not simply that we might have one bad administration to live through. The far greater danger is that either of them can create an irretrievable catastrophe.

With Hillary Clinton in the White House, there is no question whatever that she will nominate candidates for the Supreme Court who will destroy both the First Amendment right to free speech and the Second Amendment right to armed self-protection. And that will undoubtedly be just the beginning of the dismantling of the Constitution.

Hillary has already announced her desire to have an existing Supreme Court decision — “Citizens United versus FEC”— overturned because it said that both corporations and labor unions have a right to free speech.

If the government can make free speech illegal, there is virtually nothing else it cannot do, because people will no longer be free to expose their misdeeds. Mrs. Clinton has a long record of concealing her misdeeds, going back to her husband’s administration in Washington, and in Arkansas before that.

Why not vote for Donald Trump then, since he has no known agenda for undermining Constitutional freedoms?

There are few things worse than being deprived of our basic Constitutional rights, on which our freedom ultimately depends. But one of those few things is being deprived of life itself by the reckless decisions of a volatile, ill-informed, immature and self-absorbed President in a nuclear age.

All too many of Donald Trump’s words and actions thus far make him a candidate for the title of the oldest man who has never grown up. Nothing he says against his critics can change that.

The Democrats had few, and less promising, candidates at the outset. The Republicans, however, had a number of candidates with substantial achievements.

Republicans opened this game with the stronger hand. But they played that hand into what looks like a defeat at the polls in November — a defeat not only for Trump but for other Republican candidates tainted by the immature and repellent behavior of the man at the top of the ticket.

Will the Republican establishment learn anything from all this? Very unlikely. Smug elites seldom learn.