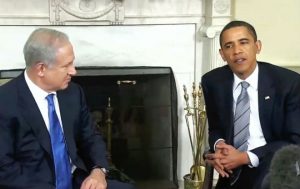 While Christians across America were preparing for the Christmas holiday, the Obama administration threw its sympathies and support to those who oppress Christians in the cradle of Christianity — Bethlehem and elsewhere.

The move by the Obama administration to abstain and not veto an anti-Israel United Nations Security Council resolution, unprecedented in American Israeli relations, provides a strong hint of why Americans voted for change in November.

Because, despite President Obama’s relatively high approval ratings, there has been a deep sense that something is fundamentally wrong in the country and that the ship of state needs to be pointed in a new direction.

This dissatisfaction, I think, starts with a loss of clarity of what our country is about. This flows directly from our leadership, which starts with the person who sits in the Oval Office.

The United States is supposed to be a beacon of freedom, shining inward across our land and outward across the world. This light has been flickering, as the Obama administration’s passion has been to extol the left-wing values of secular humanism, rather than the principles of a free nation under God.

Israel is the only free nation in the Middle East and is one of the freest nations in the world.

This isn’t just a matter of opinion. Freedom House in Washington, D.C., issues an annual Freedom in the World Report that rates every nation according to political and civil rights.

Nations are given a quantitative rating and then ranked Free, Partly Free, or Not Free.

Israel is the only nation in the Middle East categorized as “free” in this report. Its neighbor, only a few miles away, the Palestinian Authority, is ranked Not Free, with a cumulative score, on a scale of 1-100, with 100 being totally free, of 30.

The U.N. Security Council voted 14-0, with the 15th member of the council, the United States, abstaining, to condemn Israeli settlement activity in disputed territories captured by Israel in the Six-Day War of 1967.

If the U.S. exercised its veto power, the resolution would have been nullified. But it didn’t.

Why did the Obama administration turn its back on our longtime friend, the only nation in this highly troubled region that shares America’s political, religious and cultural traditions, and instead cast its sympathies with those who point a finger at their Israeli neighbor while they oppress their own people?

In fact, by the Freedom House rating, Israel is freer than eight of the 14 Security Council member nations that voted to censure it.

Support for Israel is not a vote for oppression against Palestinians. Rather, it shows those in the world who live under oppression that the principled leadership of the United States understands what freedom is about and that these principles will not be compromised under any circumstances. This can only help the Palestinian people.

This perverse move by the Obama administration was particularly bizarre in the middle of our holiday season.

American Spectator magazine reports that, because of intolerance and oppression by the Palestinian Authority, Palestinian Christians now constitute 1.3 percent of the Palestinian population, down from 15 percent in 1950.

In Bethlehem, the Palestinian Christian population now stands at 15 percent of the population, down from 70 percent.

Meanwhile, in Israel, according to the report, the Christian population has increased by a factor of five since the founding of the country.

The beauty of freedom is the possibility for change.

Despite veering off course, Americans can enter the new year, with a new administration, resolved to get our nation back in the right direction — the direction of economic freedom, of religious freedom, of political freedom. This can only be good news for our own citizens, and for our friends around the world, like Israel.

Is Big Tech Too Powerful? These Students Have Something to Say About It.