Darrell B. Harrison October 21, 2016 Clergy Corner, Contributors, Darrell Harrison Comments Off on On Black Lives Matter and the Question No One Seems to be Asking (But Should Be) 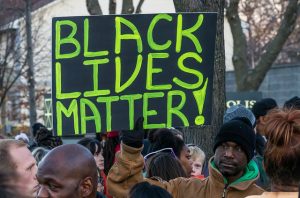 Many questions have been and continue to be raised about the movement known as Black Lives Matter and its pursuit of social justice.

But the question no one seems to be asking is one which, in my humble opinion, is the most fundamental of all:

What does it actually mean that black lives “matter” and why should it matter to me?

It is a question that is important to consider because to assert that “black lives matter” – or “all lives matter” if you prefer – is to apply the universal assumption that human life in general is inherently valuable, if for no other reason than that it is human life.

But what is it about human life that elevates it to this particular level of appreciation and esteem?

Against whose standard of measure is valuable defined? Is that standard objective or subjective? If objective, then, by what authority are we obligated to acknowledge said standard? And if subjective, who then determines when, if, or how this standard of worth changes and to what degree?

“When I consider Your heavens, the work of Your fingers, the moon and the stars, which You have ordained; what is man that You take thought of him, and the son of man that You care for him? Yet You have made him a little lower than God, and You crown him with glory and majesty!” – Psalm 8:3-5 (NASB)

As mantras go, “blacklivesmatter” might make for a good hashtag on social media, but there is more to it than that.

For to declare that a thing “matters” – whether it be a human life or a set of collection of antique jewelry – is to ascribe to that thing a degree of significance or worth that is grounded in a preconceived idea of what it means for something to “matter”.

“Man is an exception, whatever else he is. If he is not the image of God, then he is a disease of the dust.” – G.K. Chesterton

Ask anyone you know if a certain person or thing is of any importance to them and not only will you receive a definitive answer but, more than likely, they will give you the reason why as well (whether the answer is yes or no).

And it is the why of this proposition that “black lives matter” that no one seems to be talking about.

I live in a suburb of Atlanta where it is not unusual to see deer roaming about this time of year. Mornings are dark longer now, so I’m more alert than usual when driving into work, as deer have a tendency to dart into the road as if out of nowhere.

Every now and then, not often, I’ll notice a deer carcass lying on the side of the road. In that moment, I may spend a second or two in compassionate contemplation about the events that ultimately led to the animal’s demise.

Questions such as: How was it killed? Did it endure much suffering before it died? What was it doing so close to the road in the first place?

But what I do not spend time contemplating is whether I should pull my car over to see if the deer can be revived by performing CPR. I do not think to dial 911 to request an ambulance so that the remnants of the deer can be transported to the county morgue and autopsied. Nor do I bother to contact the animal’s next of kin so that funeral arrangements can be made.

No, the most attention that poor deer will get from me is a passing glance as I continue on my way into the office.

The deer didn’t matter to me.

Now, before you go reporting me to PETA or accusing me of being some insensitive, animal-hating conservative nut job, please understand that the previous illustration is neither to suggest, infer, nor imply that animals do not matter.

In fact, you may be surprised to learn just how much Scripture has to say about how we are to treat animals as the creations of God they are.

“Six days you are to do your work, but on the seventh day you shall cease from labor so that your ox and your donkey may rest…” – Exodus 23:12a (NASB)

But, though it is true that animals are created by God they are not created in the image of God (imago Dei). Of all of God’s creations, only human beings can claim that distinction (Genesis 1:27).

Which brings us back to the original question, doesn’t it?

“If we ever deny our unique status in creation as God’s only image-bearers, we will soon begin to depreciate the value of human life, will tend to see humans as merely a higher form of animal, and will begin to treat others as such. We will also lose much of our sense of meaning in life.” – Wayne Grudem, Systematic Theology: An Introduction to Biblical Doctrine, p. 450

You see, the truth, when all is said and done, is that you cannot arbitrarily assert that black lives matter without also offering an apologetic as to why. For to declare, as if in a vacuum, that black lives have significance is of no real profit unless the argument is posited within the context of objective truth.

Otherwise, the discourse is reduced to nothing more than subjective opinions and ad hominem conjecture, the result of which is tantamount to running on a philosophical treadmill as the dialogue becomes so circular and unproductive, that it just goes on and on and on getting no one anywhere.

“Christianity is a philosophy – though not a rationalistic one because we have not worked it out beginning from ourselves. Rather, God has told us the answers. In this sense it is the true philosophy, for it gives right answers to man’s philosophic and intellectual questions.” – Francis Schaeffer (as cited in Presuppositional Apologetics: Stated and Defended by Dr. Greg L. Bahnsen, pp. 241-242)

Any conversation about the value of human life, whether it be with regard to social injustice, abortion, or child slavery, must start with God and with His construct of why human life matters.

That the issue of the significance of human life is deemed by many to be worthy of protest in its various and sundry forms, is only because God, who is the Author of all life, has attributed significance to it.

It is the same today as it was thousands of years ago, when God declared holy the ground on which Moses stood as he encountered the glory of God at the burning bush (Exodus 3:5).

Only God could declare sacred and hallowed [קֹדֶשׁ] something as useless and expendable as the dirt that Moses’ worn out sandals came in contact with at that extraordinary moment.

Human life matters because, in our humanity, we bear the image of the One who gives life to us (1 Corinthians 3:16-17).

That we, as human beings, are of a particular race, ethnicity, or nationality is of no significance given that even those aspects of our earthly existence are sovereignly ordained by God, so neither you nor I have anything to boast of in ourselves (Acts 17:26).

Not our individual socio-cultural experiences.

“But may it never be that I would boast, except in the cross of our Lord Jesus Christ, through which the world has been crucified to me, and I to the world.” – Galatians 6:14 (NASB)

It is an attestation that demands an apologetic because, at its core, it is an existential inquiry that invariably points us to God and to His standard for how mankind is to relate to Himself and to one another (Exodus 20:1-17;Ecclesiastes 12:13-14; Matthew 5:38-48; John 13:34-35).

With this in mind, as followers of the God of all life, we must be prepared to respond to subjective philosophical hashtags with the objective biblical hermeneutic that mankind is not, as Chesterton said, simply a “disease of the dust”.

Previous Trumped Up
Next From the Archives: What’s Missing on the Martin Luther King Memorial