Praying for the President 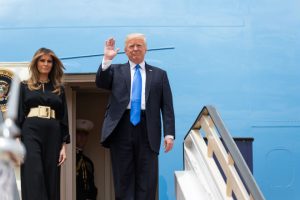 Therefore I exhort first of all that supplications, prayers, intercessions, and giving of thanks be made for all men, for kings and all who are in authority, that we may lead a quiet and peaceable life in all godliness and reverence. For this is good and acceptable in the sight of God our Savior, who desires all men to be saved and to come to the knowledge of the truth (1 Timothy 2:1-4).

So Joshua did as Moses said to him, and fought with Amalek. And Moses, Aaron, and Hur went up to the top of the hill.  And so it was, when Moses held up his hand, that Israel prevailed; and when he let down his hand, Amalek prevailed.  But Moses’ hands became heavy; so they took a stone and put it under him, and he sat on it. And Aaron and Hur supported his hands, one on one side, and the other on the other side; and his hands were steady until the going down of the sun.  So Joshua defeated Amalek and his people with the edge of the sword (Exodus 17:10-13).

Extremely intense and relentless spiritual warfare — that’s how we really need to see the work of praying and interceding for the president of our nation. We need to pray for him and all other leaders as well. We need to see the critical importance of the church in prayer doing kingdom work for God.

Why is this so important? There are a number of important reasons. One reason is in 1 Timothy 2, as we are clearly and directly told to pray for “all men, for kings and all who are in authority…” (v. 2). Donald Trump is the President of the United States. We need to pray faithfully for him every day in obedience to the Word of God. If so many believers spent just a portion of the time praying for him that they spend complaining about and criticizing the president, there would be a lot more prayers being lifted up, and much more good would be accomplished.

The opposition to this president is very intense, and much of it doesn’t even make a lot of sense. It appears that opposition is coming against him from almost every side — the media, the opposing political party, the political party he’s in. They don’t like him no matter what he does.

President Trump is far from perfect, like all the rest of us. That’s not even a question here. Yet he has made it a point to commit to carrying out certain mandates, a number of which line up with the counsel from the Word of God.

He has taken a strong stand against abortion in word and in action, which is consistent with the command not to murder (Exodus 20:13). He also seems to make decisions that are genuinely in the best interest of our nation as a whole (1 Kings 3:9). He has officially recognized Jerusalem as Israel’s capital, showing adherence to the words: “Pray for the peace of Jerusalem, they shall prosper that love thee” (Psalm 122:6).

These are the kinds of accomplishments that make him very unpopular with the Devil and the kingdom of darkness.  So the onslaught of opposition continues.

Yet the work of the church is clear. We are called to pray for our president and other leaders in authority. We need to be consistent, fervent, and persevering in prayer. The success of the president is directly connected to how faithfully the church is praying for him (see Exodus 17:8-13).

Let’s be about our Father’s business. Let’s keep the president lifted up in intense prayer every day.

Joseph Parker serves as the pastor of Greater Turner Chapel A.M.E. Church in Greenwood, Mississippi, and the Director of Outreach and Intercession with the American Family Association. He has been in the ministry for almost 40 years and hosts the radio broadcast, “The Hour of Intercession,” on the Urban Family Communications Radio network.

Previous So They Were Spying On Trump’s Campaign
Next In Calling MS-13 Gang Members ‘Animals,’ Trump Was Kind

On October 19-20, 2020, CURE held its annual National Policy Summit at the historic Cosmos …