Protecting and Promoting Freedom of Religion and Speech

Star Parker June 11, 2018 Commentary Comments Off on Protecting and Promoting Freedom of Religion and Speech

In 2014, I wrote in my nationally syndicated column about Jack Phillips, a baker who is a devout Christian who refused to bake a special cake for a homosexual wedding. He was fined and the government ordered him to reeducation courses if he wanted to work in Colorado. I wrote how Jack needed to fight for his right to practice his religion in the Supreme Court. Throughout the fight, CURE had Jack’s back.

Jack won his five year battle to practice his faith in his business. My team and I couldn’t be prouder of all the people and supporters like you who helped CURE stay in the fight.

Ultimately, religious freedom only means something as long as religion means something. That’s why CURE has fought alongside Jack Phillips at the Supreme Court. In the picture below, you can see CURE’s Executive Vice President, Rev. Derek McCoy, standing on the steps of the Court with our team behind him. Our aim is to defend our right to practice our religion and exercise our right to free speech. 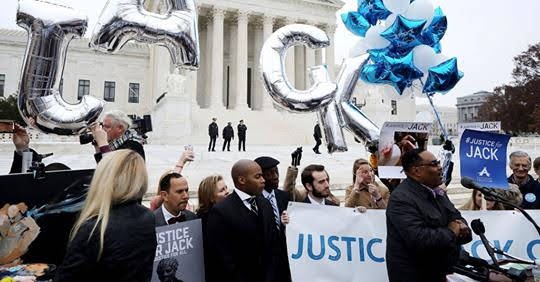 That’s why our network of pastors is so critical right now. In fact, our Clergy Network played a critical role to help Jack defend his rights, and you can watch their testimony on the website we helped create, #WeGotYourBackJack.com.

Ultimately, CURE will marshal the necessary resources to defend the ideas that made America exceptional. CURE will make sure that religion and free speech are protected, and in fact, promoted.

If you agree with us and our mission, please let me hear from you today.

We had Jack’s back. Will you have ours?

Previous No Pardon for Leftist Hypocrisy
Next Trump is Off to a Great Start, But We Need Bold Reforms to Fuel THIS