Star Parker: Call for Bernie Sanders to Repudiate His Staff

I have some updates I want to share with you below:

In undercover videos linked below, Project Veritas exposed Bernie Sanders’ campaign staff who believed their opponents should be sent to gulags for reeducation. These are self-proclaimed communists who claimed that gulags have a bad reputation because of the American media. They also said “there are things that are more important than the rule of law” and that our “cities will burn” if President Trump is reelected. We need to be clear: these were not comments said in jest or even dark humor. Unfortunately, our schools do not teach about the Soviet Union and why gulags existed — and still do exist in China. That’s why we recommend to our pastor network that they read “The Gulag Archipelego” by Aleksandr Solzhenitsyn who endured torture in a Soviet gulag because he opposed his government’s ideas.

Make no mistake, if we no longer see the voting booth as the place where we battle it out over our ideas, our enemies will place us in reeducation camps. That’s why it’s important that Bernie Sanders immediately repudiates his staff who still work for him who want to place people like you and me into reeducation camps. 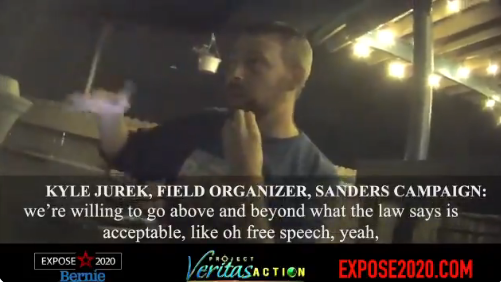 Here are some of my reactions:

“This is why we can never let liberals take away our right to bear arms.”

“The videos confirms what we already know — “Democratic Socialists” are really authoritarian communists who are willing to use force and violence.”

“According to The Black Book of Communism, approximately 100 million people have been killed by Communist governments. Democratic Socialism – aka Communism – has failed everywhere it’s been tried.”

“This video captures what our Founding Fathers knew. Liberty, freedom, and prosperity can only flourish when violent evil mobs don’t control our politics.”

“This guy is a thug. Instead of getting a real job, he listened closely to his professors and embraced an ideology of envy and force. He embodies the modern liberal mindset.”

“What must his parents think? Maybe he should move out of Mom’s basement before he starts murdering people on beaches Guevara and Castro style.”

“Why do too many people think like this guy? Because schools don’t assign Aleksandr Solzhenitsyn’s “The Gulag Archipelago.” Gulags were Hell on Earth. The face of socialist oppression.”