Star Parker: Can Republicans Get Elected in Nonwhite America? 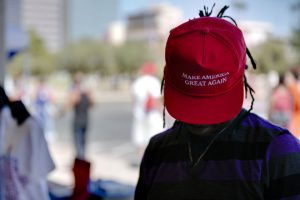 The Pew Research Center has produced a projected profile of what the American electorate will look like ethnically in the 2020 elections.

The portrait shows a continued trend of America becoming an increasingly nonwhite nation and electorate.

Pew projects that 66.7 percent of eligible voters in 2020 will be white. In the presidential election in 2016, 71 percent of voters were white.

A number of factors are driving the ethnic changes of the country. One, of course, is the large Hispanic immigration of recent years.

But another key factor is fertility rates. Whites are having fewer children than blacks and Hispanics.

The political implications of these changes are profound.

Nonwhite Americans vote disproportionately for Democrats. So, if voting patterns of nonwhite Americans stay consistent, every year it will become more difficult to elect Republicans, as ethnic and racial minorities become an increasingly larger percentage of the electorate.

In 2016, Donald Trump won 58 percent of the white vote. However, he lost every other ethnicity by large margins.

Not surprisingly, this picture translates into the makeup of today’s 116th Congress.

Racial and ethnic minorities now hold 116 seats in the current Congress, compared with the 63 seats they held in the 107th Congress in 2001.

And, again, the political implications are profound. Ninety percent of these seats held by racial and ethnic minorities are Democrats.

The last election added nine members to the Congressional Black Caucus, bringing it to 55 members, the largest it has ever been in history. The CBC today is more than 50 percent larger than where it stood in 2001.

This now makes the Black Caucus a formidable left-wing bloc to be reckoned with.

This was on display recently in the failure of the House Democratic leadership to censure Rep. Ilhan Omar, as originally intended, for her anti-Semitic remarks.

Even though it is reported that Omar was prepared to accept the House resolution initially put forth by House Speaker Nancy Pelosi, the CBC pushed back against this and, together with other far-left-wing elements in the Party, succeeded in getting a revised, much-watered-down resolution.

Is it inevitable that the nation will move left as the country becomes less and less white?

Not necessarily — if Republicans do their work.

Blacks are more conservative and less liberal than the typical Democrat.

The fact that that only 8 percent of blacks voted Republican in the last presidential election while 22 percent identify as conservative advertises an underlying opportunity for change among blacks.

This in contrast to Hispanics, 29 percent of whom identified as conservative in the Gallup poll, and indeed, 29 percent of Hispanics voted Republican in the last presidential election.

A sluggish, slow-growing economy is the last thing that low-income Americans need. But this is exactly what they will get when things get larded down with the big-government spending and wealth redistribution programs that Democrats want.

Low-income Americans need jobs and opportunity, like we’re seeing now, as the economy has shifted gears over the last two years as a result of tax cuts and deregulation.

Whether it’s an open dynamic economy, or a flexible education system where parents have control over their child’s education, Republicans need to get aggressive in selling their program in minority communities.

There’s plenty of opportunity to change mindsets for the better.

Previous After Enduring Harassment by His Government, Here’s What a Christian Baker Hopes Will Happen Now
Next Carl Jackson: AOC’s Claim that America is ‘Garbage’ … is Garbage