Taking ‘Trans’ To Its Absurd Conclusions 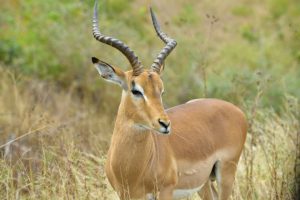 Many people will argue that I am in need of psychological counseling. I’d dismiss such a suggestion as animalphobia. You might ask, “Williams, why in the world would you want to call yourself a springbok?” The reason is simple. There is nothing in the Internal Revenue Code that says springboks have a federal tax obligation. If government officials were to demand taxes, I would ask the U.S. Department of Justice to intercede, plus they would be reported to the Society for the Prevention of Cruelty to Animals.

In these modern times, reality is coming to be seen as optional. Say you are a man and want to be able to check out the ladies’ bathroom. You simply say you have transgendered yourself and are a lady. At schools, you could visit the ladies’ locker room and maybe even shower with the ladies. In the interest of equality, these options would also be open to those who think they are men trapped in women’s bodies and have transgendered themselves into men.

Just as people are not bound by sex, they are not bound by race. Last year, Rachel Dolezal made national headlines. Both of her parents are white, but for eight years, Dolezal claimed that she was black. As a result of her deception, she became president of the Spokane, Washington, office of the NAACP and an instructor of Africana studies at Eastern Washington University. In Dolezal’s eyes, just as in the eyes of transgender people, the reality of DNA is not only irrelevant but also oppressive. Those who believe otherwise are seen as racist, homophobic or both.

Dolezal is not the only white woman who has benefited from racial fakery. Sen. Elizabeth Warren, sometimes called “Pocahontas,” claimed that she was of Cherokee Indian ancestry. That helped her land a job at diversity-hungry Harvard University as a professor of law. She described herself as a minority in the Harvard Law School directory. Not only was her great-grandfather not a Cherokee as she claimed but he was a white man who boasted of shooting a Cherokee Indian.

Personally, I don’t hold either Dolezal or Warren at fault for racial fakery. It was 1960, during my troubled time in the U.S. Army, when I faked my race. It was in Incheon, South Korea, where arriving soldiers were required to fill out a vital information form. Where it asked for race, I checked off “Caucasian.” The chief warrant officer, in charge of inspecting the forms, queried me about my designation. I told him that if I put down “Negro” — as we called ourselves at that time — I’d get the worst job. The officer probably changed the designation; I didn’t.

The irrelevancy of DNA and being able to say what you are can lead to income-earning opportunities heretofore nonexistent. For example, the men’s fastest 100-meter speed is 9.58 seconds. The women’s record is 10.49. What about weaker male runners claiming womanhood and running in the women’s event and winning the gold? Greater opportunities for fame and fortune exist in women’s basketball. It would only take a few tall men who claim they are women to dominate the game.

Some of the readers of my column are truly concerned and kind. One reader, upon reading last year’s column in which I claimed to be a springbok, warned, “Watch out for lions!”